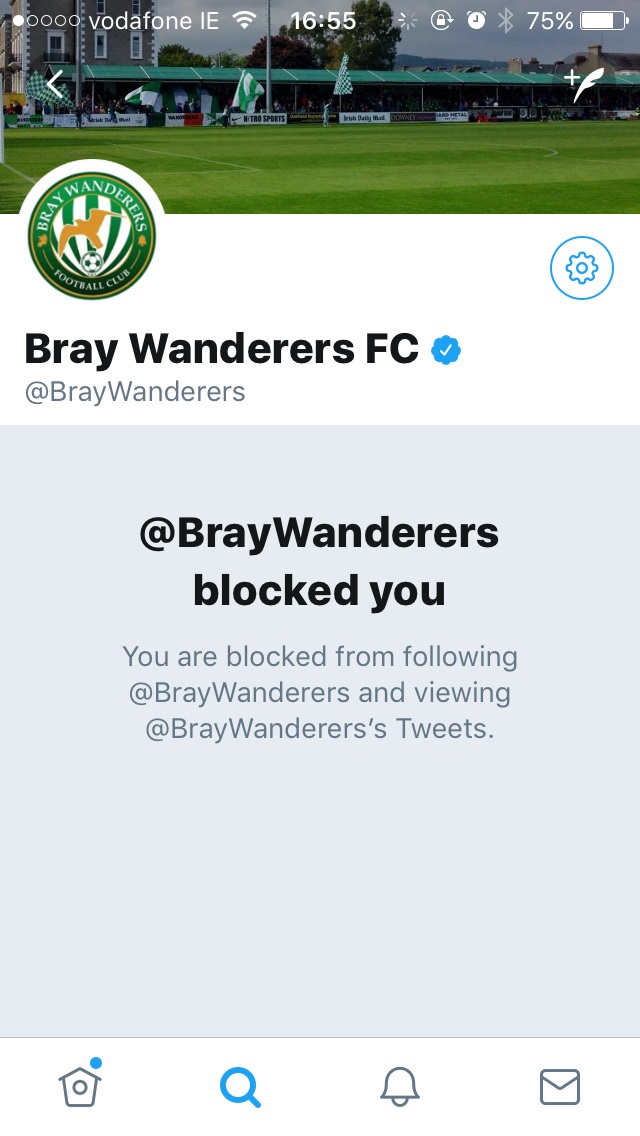 I write to you today with genuine sadness, some bewilderment and above all deep embarrassment at your recent statements, press releases and actions.

The final straw was discovering that I had been personally blocked from the official Bray Wanderers Twitter Account. That action has directly forced me into responding publicly today.

Let me explain firstly who I am. I was taken on last year, in August 2016, as media liaisons officer for the club. Three years ago I had met with a Bray club think-tank headed up by prior chairman Philip Hannigan, and had submitted a proposal as a public relations consultant. Nothing came of that and so I was surprised to be approached last summer by the then chairman Denis O’Connor. We had many talks over the following weeks and finally I submitted a detailed brief of work and my services were retained.

It was a steep learning curve. I was unfamiliar with the world of soccer in general and of League of Ireland in particular.  However, I found myself falling head over heels in love with the club. I became a defacto Seagulls Supporter. I met fans, old and new. I worked with sponsors. I grew to know and respect the sports media. I worked with the nominated charities to promote them. I laughed and joked with the hard working and good natured stewards on match day. I found great friendship with the grounds man and general factotum, the mascot and his children, the DJ, the tea ladies, the head of security, the FAS workers, volunteers and most people attached to the club. I met with the previous chairmen to learn from their experiences. I also discovered the gentleman that is Harry Kenny – as well as his brothers who were active in both running the U19s and supporting the club. And I really, really enjoyed meeting and interviewing the players who were polite and mannerly to a fault with all my requests.

However, some four months ago the then chairman and I had a major disagreement. I stuck to my guns – it was on a point of principle, humanity and also corporate sensitivity. As a result he swore never to speak with me again, an order repeated in person the following week by his brother, the general manager.  Accordingly I worked closely with the wonderful, unsung hero Mick Duffy to continue my work which included producing weekly media briefings, weekly digital newsletters, ongoing media relations and match day programmes. It was a strange time but I persevered.

More recently in June I attended official FAI training along with the other media officers from the Premier Division. I learnt vast amounts and enjoyed meeting my fellow media officers. As the workshop emphasised – we may all be competitors on the field but we can cooperate and help each other off the field.

Then the week of the Dundalk match (June 30th) I received communications from the chairman again, after a three month period of silence. I was asked to report back from the FAI workshop and there followed a barrage of nearly 20 emails in less than 24 hours badgering me as to what I personally was going to do about the gate. These aggressive emails were copied to all management in the club. I replied (repeatedly) that my role was media relations and not commercial, however I said that I would research the matter further.

Moreover, the final order from the chairman in this upsetting email chain was that I was not on any account to go near the press box at the Dundalk match on Friday night nor was I to speak with any member of the press.

I confess I did not follow that order. Every home match I meet with a local journalist in a personal capacity and assist him by carrying his laptop to the press box. I did this at the Dundalk match as normal. However, seconds after my returning to my usual match viewing position outside the club shop I was accosted by the general manager. In front of witnesses he shouted at me, inches from my face, that on no account was I to visit the press box again as ‘things were happening’, ‘things that were nothing to do with me.’  The following week my services were no longer required.

Then the two last press releases were issued that captured the attention of not only League of Ireland fans, but people across the country and indeed has garnered interest on an international scale – and not in a good way.

Although I must say there was some very fine humour on social media as a result, overall the response was one of astonishment, ridicule, hurt and upset.

The reason therefore for my writing this open letter was fostered in my treatment up to my being let go and my subsequent blocking from Bray on social media. I understand, although this has not been officially communicated to me, that complaints have also been made to the FAI about my sharing the subsequent social media. #WeAreNorthKorea

The reason for my writing this letter is that, as a PR professional retained by the club, had I been allowed to do my job, this painful month of communications would not have got past the thought stage.  We would not have become the laughing stock of the League of Ireland and beyond.

The reason for writing this letter is for the many fans who have been let down.

The reason for writing this letter is for Harry, his management team and the players.  They had no choice in the content of the press releases. They had no part in the games being played off the field. They had no choice even in being able to confirm that their jobs were safe. How could they play football in such horrible conditions?

The reason for writing this letter is to express the opinion that just because the management of Bray Wanderers could release such statements, does not mean that they should.

For the love of League of Ireland would such statements be abolished and forbidden in future club communication or clubs risk having their licences revoked for untrustworthy, hate-speak and irresponsible communications.

All clubs should sign up to publish only truthful and accurate reporting. We should not condone ‘trash talk’ in the League. In fact, we should not tolerate what looks like the drunken rants of an unhinged and vindictive person or persons unknown.

We can all learn from mistakes. Let the lessons learnt from this catalogue of fiascos be that clubs should not have the right to publish anything they want. Let there be a code of ethics, a filter if you will, on what clubs may report on.

Today, the target has been the fans, the local councillors, the general naysayers. Tomorrow the target may be minorities, the vulnerable and even individuals. Cyber bullying is well documented. This should not be condoned in the League of Ireland.

I ask Bray Management to desist from any further intemperate, crazed and hate-filled rhetoric

I call upon the FAI to enshrine in its licence a code of ethics on club communication – with appropriate sanctions when clubs step out of line.

Please find enclosed my detailed job description. It was unfortunate I was not allowed to fulfil the final skill set. The irony is not lost on me.

Point of contact for key media relations in particular East Coast FM and local papers. Meetings with local media to confirm content and frequency of updates. Ensuring content is provided on a timely basis such as schedules, changes to same, regular radio appearances, news and other information. Contact with wider media as a backup to current Club contacts.

Content and news generator for all non-mainstream sports updates. Content includes player news, family days, mascot updates and any activities. Generation of content to final signoff from the club. Provision of photography where appropriate also.

Linking with Community to provide promotion of local events, including activities such as Halloween, family days and other local promotions.

Working with key players / management to build awareness of players and their personalities. Developing content for use in the programme, on the Facebook, website and with the media.

Working with Dermot and the schools’ programme to ensure promotion of educational activities.

Once lists are managed and divided then I can set up newsletters for the different stakeholders. Currently these are season ticket holders, general fans and junior supporters. Once we look at the different target audiences we can decide if the newsletters need to be separate or can be combined – either way content can be shared across audiences.