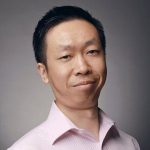 Andy Tian has been labelled a ‘traditional’ entertainment man coming as he does from the world of online, mobile, gamified entertainment. ‘That was before I moved into the blockchain arena,’ he says, ‘it is funny to think that pre-blockchain is considered traditional.’

He has the last laugh, however, with the ICO for GIFTO, the virtual gifting protocol, closing out in one minute to the tune of $30million. ‘Two third were institutional investors and the last $10million came in one minute.’

GIFTO was the fastest selling ICO in Asia. It was four times over-subscribed and it will be the largest non-crypto adoption of blockchain technology by a mile. Tian expects a minimum of 5million users and 100,000 content creators when the product launches in Q1 of next year.

How can he be so confident?  As CEO of AIG, Asia Innovations Group, Tian brings a wealth of ‘traditional’ gaming experience to the table. Previously he was head of Zynga China and there he learnt the business of gaming.

‘The millions made in the gaming industry are from virtual purchases and assets.’ He explains.  ‘Gamers buy virtual swords, armour, tools – all digital assets – with which to play their games. That is the real powerhouse of the industry.’

Tian also looked at the issues surrounding monetizing content. ‘Right now, the obvious step is to place advertising on your channel. But this sucks. No one makes any real money from advertising. It is a broken model and needs a change.’

This is where Tian is disrupting traditional advertising models; that word again.  ‘Unless you are a major brand with millions of followers it is next to impossible to make money from your content. Also, once you get advertising companies involved then they want to dictate the content to suit their audiences not the content creator or artist.

‘It is the wrong way around,’ he says.

A year and a half ago Tian and AIG launched UpLive, a live streaming platform. In just 18 months it now boasts 25million users and 60,000 broadcasters or content creators. There is no advertising. Instead fans of the broadcasters can show their love by giving virtual gifts.

‘We can customise the gift to suit the content creator,’ Tian explains.  ‘Giving a virtual gift is an emotional reaction by a fan. It is not the same as donating money; it is a very personal experience.’

Tian goes on to demonstrate. He asks me to tell him a passion of mine. I think for a moment and say that I sing in a number of choirs which I love. He then shows me a video of one of the broadcasters who sings and gives her a virtual golden exploding microphone as a gift. I watch the video and it works. This is not throwing dollars or yen but giving a gift. Had that been my channel I would have loved it.

If Uplive is a proof of concept then it is definitely a success. Already the revenue generated on the site is in excess of $100 million.

‘What is interesting too is that content creators can make money even if they only have a modest following,’ says Tian. ‘A local artist might benefit from local support and may make an income through fan support. A thousand committed fans may give more gifts than several thousand casual fans.’

Currently top broadcasters, with approximately 100,000 fans, are making $20,000 a month on average on Uplive which is considerably more than on comparable platforms.

Fees charged are a percentage of the cost of the gift – which may vary from cents to several thousand dollars. As Uplive is a live streaming site it is resource heavy and that is also reflected in the fee structure which alters from region to region.

However, Tian points out that Uplive has a limitation. It only works on that one platform.

‘Using the blockchain technology we can offer an independent platform for virtual gifting for content creators,’ says Tian. ‘But these gifts are not limited to just one platform, they can be used across multiple content generation platforms.’

First up will be Instagram, Youtube and Facebook with others coming on stream. Quarter 1 is the launch date and Tian expects a minimum of 5 million users from the get go. ‘It will be the largest non-crypto audience on the blockchain,’ he says with pride. ‘Content creators just need to post a link on their other sites.’

The virtual digital assets can be charged at different rates, can be replicable or unique. Fees charged by AIG will be less as GIFTO is web based.  ‘It’ll be like the Cryptokitties, ‘says Tian. ‘This is a well-developed and proven concept.’

Adding the blockchain – and smart contracts – will also allow for faster payment. Previously content creators would have to wait for 30 days until their share of the revenue can be calculated and shared. With smart contracts, the fees can be paid instantly.

Tian is a bit scathing of other ICOs that are less than ready with products. ‘I look at other roadmaps and see product not arriving for a year or two. We will have our app market ready in Q1.’

Asked what else he will spend the money on and he talks about influencers and brands. ‘Celebrity led endorsement is very powerful and we will be announcing names in the new year,’ he says.

Celebrities are used a lot in ICO marketing according to Tian but the celebrities on GIFTO will actually use the site with the tokens paying for gifts. ’It is a natural match,’ he says.

However, it is the longtail effect that interests Tian the most. ‘Local, home town heroes can generate real income from GIFTO. The days of big advertising monopolising the world of content is over.’

Not bad for a traditional man.