First published in the Irish Independent on May 18, 2016

We are a nation of lost souls. We have swapped the security blanket of religion for the cold harsh light of truth. We wander like bewildered two-year-olds lost in a grocery store. What began like a moment of freedom has swiftly translated into a terrifying ordeal. We have three choices: stay out in the cold, embrace it even; return to our mother’s arms and the refuge that lies within. Or we can seek new truths, new comforts. 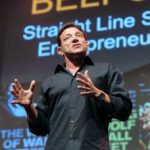 The latter choice, the era of self-enlightenment is truly upon us. It is the new drug of the thinking classes, the opiate we choose in the search for fulfilment. We had become a nation of fast food snackers and now we need substance.

The route to enlightenment has many paths. Last year, I attended a Jordan Belfort seminar – he of the Wolf of Wall Street fame. The seminar was aimed at making money but he caught the mood of the audience at an early stage.

Jordan scanned the crowd and sympathetically called us out. We were there to learn how to make money but he ringed our wings by calling on our pain. No one with a successful business attends a motivational sales seminar by Jordan Belfort, pictured below. Instead, injured souls seeking assurance gather to hear the magic patter. If the lottery is a poor man’s tax, then motivational sales seminars are an aspiring (or is that failing?) entrepreneur’s levy.

Jordan’s heart-spring moment was when he explained why some people were ducks and some were eagles. No one wants to be a duck, not even the ducks. Belfort told some funny stories about the duck mentality and in a move splendidly focused for the Irish audience, spoke movingly and compassionately about how a lot of the eagles in the audience had taken a beating in the recession.

How we had been flattened and lacked certainty. How we had begun thinking like ducks but that was okay because it didn’t mean we were ducks. The very fact that we were here today meant we were so, not ducks, oh no, but eagles about to get a new lease of life. And everyone clapped and everyone believed they had a chance to win the lottery.

Last month, I attended the Landmark Forum, a pathway to personal development and sometimes dismissively termed a cult, a case which it energetically rebuts. It may have some of the appearances of a sect; it focuses on obedience, it demands commitment and it extracts promises from its participants. It practises secrecy in some parts and full-on proselytising in others. It does not advertise its wares, but uses the Forum members to bring in new members.

Personal development is a different kettle of fish to financial development. For one, the end goal is a lot more significant and for another, it is possible without the intervention of external and random forces. It is possible. And this is the foundation of the Forum – the possible.

The course unfolds under three non-stop days of intense training. Then there is the sharing – the even more intense bonds formed through people sharing at the deepest level of their lives. It felt like being in the trenches; there was nothing too base to be shared and nothing too insignificant to be celebrated.

It may sound as though this is a transitional, gradual process but in fact it happens very fast. At 10.30 on day one, I shed my first tear. However, I had already laughed – big guffaws of laughter – at least an hour before. It had become a family event very quickly, only we moved from the trauma to the resolution at the speed of light.

Taking part in the Forum was a rollercoaster of a ride. Aside from the tears, the laughter and the sharing, there was plenty of anger. It is not easy to tear people apart without breaking a few long-held beliefs and opinions. But when the silence surged softly backward when the plunging hooves were gone, we looked at each other and we were all good. We were our word. We were made man, re-made man.

Just recently, I attended the funeral of my father’s best friend.

They are both now in the Summerlands, as they say in these parts, hotly discussing the politics of the day no doubt, going to the bookies or sharing a laugh. To my surprise, I found a resurgence of traditional comfort; maybe my seeking had re-opened a door backwards as well as forwards.

It has been some time since I was in a church and longer still with the benefit of a powerful choir at my right elbow. I reached back into the childhood of my beliefs and the comforts of hymns settled around me like a blanket.

Lame ducks, shared emotions, the endless possibility of humans, and hymns – all are beautiful and empowering and good – but the greatest of these are hymns.

Posted in Inspire, Musings on my time on this planet ..., Speaking and tagged hymns, jillian godsil, jordan belfort, the landmark forum.