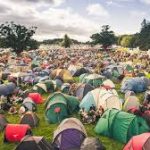 I can write this now. I had to wait until I could confirm my daughter had escaped from Electric Picnic alive with all her limbs intact and preferably with her tent still in tow. It is a good tent and I did not want to see it discarded with the other tents. Although I know that discarded tents and wellies can be collected for refugees which is a fabulous use for them. On this occasion and with this tent though I wanted to see returned home.

My daughter is a good daughter too and I wanted her safe home too. I bumped into many parents over the weekend whose daughters were also at the picnic. We shared stories and worries. I hope they all came home safe too.

Going to the picnic was a last minute decision for my daughter. A lone ticket attached to some friends was for sale and she jumped at the chance. I jumped too but with worry – and I am the most laid back mum on the planet. I do benign neglect with a passion but on this occasion I began to double and triple think.

I’m the same as Jonathan Healy of Newstalk fame. He announced several times on air last week that he had never done a music festival. I have to confess to being of the same breed – although it is not without trying hard to break my duck.

And so I had no real idea of what my daughter would witness on her three day sojourn.

She pulled the tent from the attic and said that would do her. But when I picked her up she had not actually opened the tent to see if it still worked and had all its pieces. I made her promise that if it was a failure she was to call me and I would collect her.

The other problem with the tent was the sheer size of it. And the weight. Then the sleeping bag took up most of the remainder of her space. She put the tent bag on her back and balanced another bag on front but she could not walk far with such a load.

She was to meet her friends on George’s Quay to catch a bus to the Picnic. But the day before she only had a vague meet up plan. I stood over her while she texted firm details.

She told me that the Happy Pear were going to be there and as a big fan of the brothers she planned on eating exclusively with them. I began to worry about food. What if the queues were too big, what if she couldn’t find the stall, what if she ran out of money?

Eat Chips I advised her. Chips are good, chips are soakage, chips are cheap. At a music festival eat lots of chips.

Then I started worrying about finding the toilet in the middle of the night. And then finding her tent on the way back. While driving her up to Dublin to join her friends I stopped at various garages and then at the Cornelscourt shopping centre looking for torches. I could not find a single torch between Aughrim and Blackrock.

Finally in Dunnes Stores I found some decorative Halloween-themed, battery-operated tea lights. The batteries were even included and I returned to the car and my daughter triumphantly clutching the set of four lights. I triumphantly presented the orange collection as proud as if I had won a medal.

As I said goodbye I asked her to text me morning and night to say she was still alive.

It turns out I need not have worried. The Happy Pear was not at the Picnic but there were plenty of other eateries and yes my daughter ate chips.

She did not bring enough drink she said and it was too expensive to buy drink there. However, I secretly smiled at this comment. Less is definitely more at a festival in my parental viewpoint.

The tents were well laid out. It was easy to find it even in the dark. Her own tent went up and was only a problem when the friend sharing the tent left the flap open in the rain. Even a good tent will let in rain if open.

She texted me the first night at 12 midnight as she went to bed. Her neighbours were not so good and kept her awake until 630am. The next night she got her festival legs and didn’t hit the sack until 430am.

And the little tea lights proved to be of some use in the tent itself. Their combined wattage was not enough to light the way to anywhere but they provided a little glow in the dark – enough to make the tent seem cosy when she finally went to bed.

So, she survived. The tent came home with her. The craic was mighty. She met other friends. Her legs are killing her with all the walking and generally standing around. She will probably sleep for two days straight.

And I am going next year!