How to lose a home in Ten Easy Steps 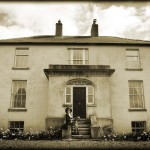 On August 7, 2013, the sheriff will officially seize my house, my former home. Unlike some other high profile bankrupts, I don’t have secondary houses to fall back on. I haven’t relocated to America or I don’t swan around the world on yachts. I had one home and on August 7th I will be officially homeless. Now, don’t worry, I only mean homeless as in lacking a home that I once had. In fact, for the past four years I have been renting a cottage nearby with my two children and various animals. I rent a very beautiful cottage with panoramic views across the local little hills. My old home has panoramic views also, but across to Mount Leinster as befits the central house of a townland, for Raheengraney House is named for its region.

I don’t think I will be there to witness the surrender of my once beautiful home. It has been a long time since I was there, maybe January of this year, and I don’t relish the thought of a sheriff changing locks or putting up yellow tape to stop trespassers. On August 7th, I will become a trespasser in my own home. It is the ending of an era. I had fought a long time to save my home, some six years or so. It is not that I give up, but the task was beyond me. There are some battles that can be won, some that need to be fought and some that must slip between the fingers. I did not know it but Raheengraney house was always slipping through my fingers, from the very day we saw the ruin.

So, I thought, on the eve of my impending homelessness, that I would chronicle how to lose a home in ten easy steps.

Step One – Get Married

Ok, I know you might think I am doing a Tristan Shandy here, and I promise to speed up shortly. But the first place to find a home (the one to be lost afterwards) is often to get married, and I was no exception. Except, exception provided, my first home was in Dublin, on Leinster Road and had we remained there, I most certainly would not be homeless in a week’s time. Leinster Road and overlooking Mount Leinster, coincidences are always at play. I said I would be taken from that home in a box. Fortunately I was not, but sadly we did sell.

My husband had a self-confessed, mid-life crisis. He wished to leave banking. He cast around for alternative careers and together we settled on gentleman guest house owner. Then we cast around for a suitable ruin. Ruin for we had limited money and suitable, well just a suitable ruin I guess. We were sent a brochure within a brochure. The second brochure was a hand drawn rendering of a house, Raheengraney house. It looked promised, as indeed art might.

We visited the first house (with photographic image) and then the second (with line sketching). The second, Raheengraney House, was in very poor repair. But, in our first viewing we met with a gentleman guesthouse owner extraordinaire who told us all about his lifestyle. I have to say he wowed us both. He and his beautiful lady wife are strong friends of mine to this day. Now, they are very good at running guesthouses and hotels. They are also warm, vivacious people. And he is a most convincing speaker. We fell for him but we bought Raheengraney House.

Gentleman guest house owner, with emphasis on owner. I know, you thought I would emphasise the first word, not the last. I may be divorced but I refused to be drawn on bitchiness. So, finally we were in possession of a guest house but only as owners. It was never really run as such, aside from a few family delegations. My own business, however, soon mushroomed in the basement where I would spend much of my time over the years.

So, while being a gentleman guest house owner is a nice title, it doesn’t involve that much work. Owning a guest house without guests is pretty boring I guess. Either way, I worked below ground and we had very few guests above. Boredom had its way and my husband decided, along with the rest of the country and sadly with my full support, to become a bit of a property whizz. It made sense for we had increased our investment in the guesthouse tenfold: why not use that equity elsewhere.

Ah, I can see it now and hear the gasps in the audience. Now we are getting to the nub of the problem. All the rest was filling, superficial nonsense. If divorce had not reared its ugly head then the homeless equation would not come into being. A divided by B equals C.  Dear reader, you are probably right. Getting divorced was probably the single biggest factor in my becoming homeless in the next eight days.

Go viral. Talk about stuff. Think you are making a difference.

Nails in coffins, thump, thump, thump. My first day in court the judge called me a human being. She castigated the banks. She insisted they talk to me or she would strike the case.

On my return to court I was no longer a human being. The judge just signed the order. I was also no longer a home owner. I had become invisible.

I had said, second time around, that I would only leave Raheengraney House in a box. I think I must have a latent death wish or something. Again fortunately, I did not. I am still alive. I have left the house and now the house is leaving me. Parting is such sweet sorrow.

That is two houses I have not left in a box. Maybe my third will be a keeper.

So, ladies and gentleman. There is nothing in my steps that might frighten you out of the ordinary yet I implore you not to follow the sequence for fear that you too may follow my fate. To be homeless is not liberating, it is not cowing, it not regretful, it is not depressing, it just is. And so I shall be on August 7, 2013. 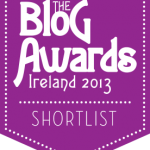 PLEASE VOTE HERE FOR MY BLOG