You’ll be glad to hear that I can stop sleeping with my assenters now. For the past two weeks I have done nothing but talk, breathe and sleep my assenters. In my tiny house, my centre of elections has been my bedroom and as the days moved closer to the nominations date, I slept on less and less of my bed as the assenter forms took over. It was the filmic equivalent of the march of the assenter forms. 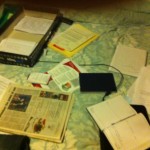 I should pause to explain. In lieu of a financial deposit, candidates can collect assenter forms. For local elections 15 are required, for European a weighty 60 are needed. These forms do not commit the assenter to supporting the candidate, voting for the candidate or even suggesting the candidate is of sound mind. However each and every assenter must be a registered voter in the same constituency as the candidate. And, here is where it gets difficult, each assenter must have their form witnessed by a garda or a commissioner of oaths.

It was suggested that it might be easier to lodge a deposit and I cannot argue with that sentiment, except when the modest deposit of €100 for the local office is half my weekly income. As for the €1800 required for Europeans? Well, my children would need to forgo sustenance for some weeks to stomp up that amount.

So instead I opted for assenter forms. Friends would run in the opposite direction when they saw me coming. I compulsively counted and recounted my growing stack of forms like a miserly Santa checking his lists. I pestered friends, I chased acquaintances and I even accosted strangers. ‘Give me your form’ was my battle cry in place of ‘Give me your vote.’

On Friday I travelled down to Cork to lodge my forms and yesterday I did the same in Wicklow. I am now officially on the ballot. My bed is returned to me. My friends can relax when they see me coming. And now instead of asking for your form, I am asking for your vote. Let the battle commence!

And now for something completely different: As I was driving home yesterday from lodging my forms in Wicklow, a bird – well I presume it was bird – defecated on my windscreen and across the roof of my car. From the pictures below you can see why I question the originator of the excrement. The whole car shook. Once I got over my shock I started to laugh. I am of the opinion that bird pooh is lucky, a sentiment perhaps to cover the mess, but nevertheless I have always had this notion. Given that thought, I realised I must be one of the luckiest people in the kingdom! 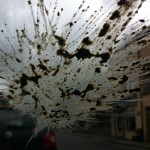 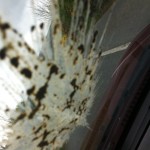