I am now the proud possessor of a hammer. A proper hammer, and I have used it a goodly number of times. About 20 times so far. To hang pictures. On the walls of the house where I rent.

A little over a month ago, I did not have walls to rent. I had exited my old house, rented for the past 10 years, where I had lived with my two daughters and our animals.

I had exited our house as the lease had been terminated. There was no trouble, just the owner wanted her house back. I searched Wicklow high and low for alternative rental accommodation but nothing was to hand.

As the months rushed together, I found myself getting more and more frantic. I looked at caravans, thinking I might buy one at the end of the summer. But like time shares, caravans should never be bought in warm months. Fortunately, the ones I viewed were so shabby as to be unattractive even in the heat, which was one positive consequence of a modest budget.

I planted my daughters in a cottage, found at the eleventh hour. A friend offered to rent me a bedroom and at the grand old age of 51, I went couch surfing. I had tried to embrace the new me, the new rental-continental me, and now the trendy couch-surfing me. But I was failing miserably.

I went each day to Lawless Hotel in Aughrim and plugged myself into the net. I pestered those patient staff with gentle requests to reset the modem when the internet went down. I drank endless cups of tea and sometimes, when budget allowed, bought lunch as well. I hid myself in a corner and did my best to ignore the busy rural trade plied in front of me.

I resigned myself to several months of stealing internet while I tried to set up my business again. It stuck me forcibly that having no fixed abode made it very hard to be upbeat and win business. I chatted on the phone and joked about my incipient alcoholism should I continue to have to work out of bars with internet. It was tough going.

But back to the hammer. In the middle of all this angst, I got a message from a friend. He had heard about my latest predicament (and there have been quite a few) and got in touch to say he had a cottage to rent. I saw the cottage the next day and moved in the following weekend.

Since that time, I have thrown all notions of minimalism out the window. I have rejected the clean interior designs beloved by the very cool. Instead, I have embraced my inner clutter goddess and have been nesting with an enthusiasm that is religious in its zealotry.

I realise that I had not bought one thing for the house I rented for the previous 10 years. After losing my original home to the banks, I had been coasting. I lived in the house but it was not a home, not in the material sense. I thought I was ‘over’ possessions. I had them all taken from me, or I had sold them or I had lost them – and I no longer cared.

Now, in my little unexpected dreamboat of a house I can only see my possessions, which are growing daily. I have raided all the charity shops in a 50-mile radius. I buy things, small things, clutter, knick- knacks, bric-a-brac, and bring them home to my little house. I place them on small tables, on window sills, and I hang pictures on the walls. With my little hammer.

I have never been so given over to materialism. It matters not one whit that my budget is modest and my target shops are charitable ones. Last week, I was trying on a skirt in a Saint Vincent de Paul shop in Tinahely. In the make-shift dressing room, I spotted a tangle of coloured glass. On closer inspection, it turned out to be a pendant lamp shade.

It was intended for use in the shop but the kind attendant sold it to me for a fiver. I brought it home and hung it in my bedroom. And then I turned on the light. The bling is terrific. The ceiling and walls of my bedroom are littered with shards of coloured light. 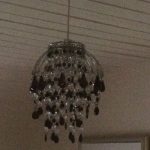 I, who once had crystal chandeliers, am riveted by my coloured glass. I rush guests up to my bedroom and turn on the display. I am prouder than a circus master of my precious find. 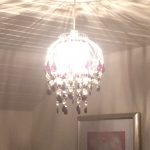 I am the same for every stick of furniture in the house, every trinket I purchase and every plant I buy. I walk around my home and talk to the contents. I thank them for their use or their beauty and sometimes both. It is like a veneer of pixie dust is covering the entire house. I never knew that I had missed feeling at home so much and having now arrived at home, I am so happy.