For once, and this is very unlike me, for once I am cheering for the end of the summer holidays and the welcome return to normal life now that we are all going back to school tomorrow, indeed some pupils have already returned. Typically I cherish a child-like horror of school being mentioned while still technically in August and the recent years’ slippery slide of returning to school before September has greatly saddened me for all sorts of nostalgic reasons and very few practical ones. It is like Christmas being flagged before Halloween is over; to my mind it is just not right.

But as the dying days of summer drew to a close I can only say that I have witnessed a wave of misogyny spreading across the globe, creating a scourge as nasty as any plague, and infecting people in despicable ways. In some ways, this misogyny was accidental and haphazard but it was no less disturbing for its seemingly unpredictable eruptions.

First off was #slangirl. While her actions were less than clever, it was the singling out of the young girl for such vitriol that was frightening. There was no #slaneboy or even #slanecouple. I was horrified to see adults rage in and throw stones at the young woman, slut shaming her without trial, compassion or humanity. Let those without sin throw the first stone or at least examine the log in their own eye. Many of those hurling unnecessary and cruel abuse at young woman probably, due to age and lack of technology, committed their own foolish mistakes far from the unflinching eye of the ubiquitous camera phone. 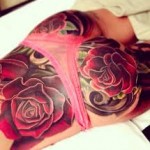 Second was Cheryl Cole’s sofa, or rather her bum with the rose-garden pattern on it. It reminded me of nothing more than my late Aunt Dorothy’s colourful but faded rose-festooned sofas and Cheryl’s panties were like my aunt’s famous lacy antimacassars poised on the arms and backs to prevent staining by use. You never promised me a rose garden, Cheryl, and while the lady is entitled to decorate her body in any way she sees fit, I was surprised by the criticism that went beyond constructive.

To my mind many tattoo ‘sleeves’ with naked ladies and entwined loving hearts are far less visually attractive than overblown roses, and while all tattoo art may bow down eventually before gravity, it is her choice, her body. I might not wish for my lady garden to have a rose garden behind, but then that too is my choice.

Finally was our little Miss wholesome Miley Cyrus. Words fail me. She twerked but only as white woman would. She stripped off her clothes for a nude ensemble that covered less than Cheryl’s ass tattoo, and then ground her own as yet adorned bum into that of Robin Thicke’s 16 year older body. I can only think she was badly advised.

But, my comment on these incidents while initially driven by a horrified dislike of slut shaming and misogyny, my secondary thoughts are on the people who posted the stories. That to me is even more interesting.

In #slanegirl we have yet to establish who loaded up the picture. I was at the concert and we also nearly witnessed similarly undesirable behaviour, in this case a young man attempting to urinate on the grass beside us. Again let me clear, I have nothing against urination or blow jobs, but not in my (sic) face please. So a member of our party told the young man about to sprinkle where he tinkled to shove off or words to that effect. He gave the young man a push in the direction of the male toilets. Incident over. That I think was the right reaction. Not to document and load it the pissing man up on social media – and given the crowd was so tightly packed it would have an unpleasant, to say the least, alternative outcome.

In Cheryl’s case it was her tattoo artist who loaded up the picture. It just makes me wonder if he had permission to do this. I don’t know for sure but I get the impression that Cheryl would not have tweeted her bum.

Finally with the young Miley. If her attempt was to attract attention then that was one hundred percent successful. But my guff would be less with her antics, to use an old fashioned work for new-fangled twerking, and more with the fact that CNN posted this as their top news story. There was quite a back lash from the serious news community and rightly so, as serious pundits decried the attempt to drive traffic over communicating news. There is no way a young girl pushing dancing boundaries at an awards ceremony should had rated the top news story over Syria, Eqypt, and all that other stuff going on out there on a daily basis including criminal chemical infanticide.