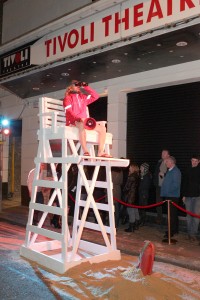 It was a cold and frosty night but the American Lifeguard, dressed only in shorts, tee shirt and flipflops, stood aloft in his high chair and called constantly through his megaphone. “Do not go into the water,” he repeated. The crowd, Irish and wrapped up in scarves and coats, laughed and stamped their collective feet against the cold.  A number of women wore very high heels combined with belt-short skirts and their bare legs shivered in sympathy with the lifeguard’s. No one was in any danger of going into the water, not that there was any in the city centre location.

The queue was lined up for the Jameson Cult film night in the Tivoli Theatre on Frances Street. Previous screenings in the Cult series had included Snatch, Alien and Reservoir of Dogs. Attendance was by invitation only and we, my friend and I, had gained our entrance through a competition run by WorldIrish. We joined the queue and soon spotted another actor roaming alongside, dressed in cutoffs and oversized glasses. Chief Brody was on hand to keep an eye on things. This caused more laughter and talk and we made some temporary friends in the people in the queue next to us. 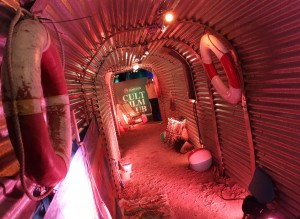 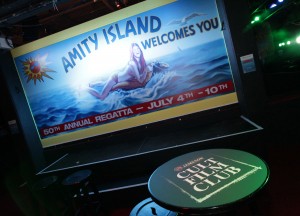 Soon the line moved and we entered into a different world. The theatre had been totally dressed in Jameson Cult Film bunting and decorated to resemble the famous American seaside town.

The iconic poster welcoming the 4th of July tourists was plastered across one wall. Cocktails of all kinds, whiskey-based of course, were proffered once we got inside. 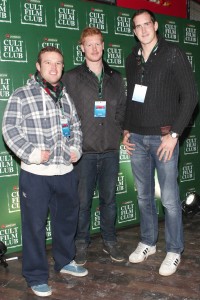 The DJ played some tracks and there was a palpable air of excitement. We were all keen to see the big white.There was a regular queue of well-known faces posing for photographs on the Jameson Wall of Fame. Rugby players Tom Sexton, Tom Denton and Devin Toner lined up along with other celebrities including actor David Coffey and TV presenters Liam McCormack and Lottie Ryan. My friend and I bunched in and we did the same. We’ll be famous one day too!

By nine the atmosphere was electric and we made our way into the auditorium. Given the dense nature of the crowd I had to sit in the row ahead of my friend. I spotted Darragh Doyle @DarraghDoyle of WorldIrish seated to the right of me and I waved my thanks. As the lights went down and the film began I soon discovered why people go to scary films with friends, as jumping or involuntarily screaming at different points is very embarrassing when sitting alone.

The film was supplemented by actors and they seamlessly integrated into the onscreen drama, using the whole theatre as their stage. I had forgotten just how powerful the film Jaws had been and how deeply it was etched on my psyche. I remember the Get out of the water bits and the music of course. I remember the We’ve got to get a bigger boat lines but I had totally forgotten the scene where Quint tells the story of the sinking of The Indianapolis after it delivered the bomb. His story took up when the boat had been sunk. So secret was its mission that no distress message was sent. The men floated in the water in circles fighting off the sharks. Sometimes they won, sometimes the sharks won. Actually, the sharks were always winning and picked off the men at will. Finally, after a number of days, a plane spotted the wreckage and so began an agonising slow rescue. It was then, said Quint, as he waited for his turn for rescue, that he felt true fear. Eleven hundred men went into the water but only 316 came out.

What shocked me was that I have been telling that story for years. I use it to illustrate how the re-injection of hope, into a situation where everything seems lost, can trigger a deeper sense of fear. The replacement of apathy and loss with hope, but not certain hope, is very scary. There is so much more to lose when we dare to believe. I have told this story when talking about debt, love, ambitions, belief – so many things as fear is only real when hope is present. I thought I had read the story is a yellowed Readers’ Digest in my aunt’s house but had totally forgotten its actual origin. It was a strange sense of reverse déjà vu. 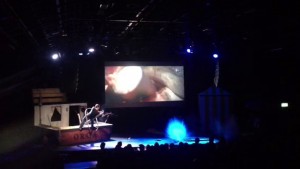 At the end of the film where Chief Brody, now alone on the boat, aims at the shark hoping to blow up the compressed air tanks, the young actor in cutoffs climbed onto projected scaffolding in front of the screen. As Ray Scheider fired onscreen, so too the actor on stage fired and special effects saw water splashing up in response. With the final successful shot, the shark exploded and we, the audience, were drenched in a cascade of water. The laughter was loud and the audience was wet. I automatically assumed the crash position – much good it did me as my reaction was slower than the shower. My friend jerked backwards but suffered the same drenching. Only one had a wet front, the other a wet back! 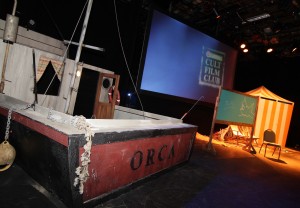 We travelled home then, although the DJ was only getting warmed up, for we had miles to go. Still laughing we drove through the bright lights of Stephens Green and as we waited at one set of lights, my friend spotted a car full of men trying to get our attention beside us. Roll down the window they gestured and I did. However, rather than the admiring glances of potential suitors or messing from stag party males, we were faced by plain clothes guards good naturedly informing me that I had forgotten to turn on my headlights. I thanked them and explained I hailed from the country now and was no longer used to the bright lights of the city. Except when the cameras were rolling! 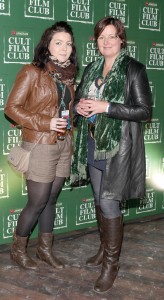