It is quite an expensive book as paperbacks go, costing €150, but it is possible to write the cost against tax. I was advised that by the young barrister Ruadhán Mac Aodháin who was also purchasing the book just as I arrived at the book launch. Ruadhán was part of the legal team that made it possible for me to be mentioned in the book.

In 2014 when I became the first female bankrupt under the new Insolvency laws in Ireland, I was unable to run for public office. Those of you who know my story will remember that my own personal descent into financial ruin (divorce + home repossession + business failure + bailiffs) had created an accidental activist.

I became well known for ranting and raving on the airways domestically and abroad about the injustices facing ordinary people.

I was – and remain – very anti the stranglehold the banks have on the people.

I was – and remain – very anti the spin developed by the banks to say that people who fail financially have the moral integrity of Artful Dodger and then some.

I had had enough. I was tired of the system where being a good, law abiding, hard-working, honest citizen had resulted in one crushing defeat after another. I won’t bore you with my story here – there is plenty of that on my blog – but I wanted to stop being a victim.

So the law case, handled by the incorrigible Colm McGeehan and ably barristered by Dr Michael Forde, Richard Humphries and the aforementioned Ruadhán, led me to the High Court so that I could argue my constitutional rights were being infringed.

I blushed when I met Ruadhán again for I was a most awkward client. The sharing of reciprocal affidavits where nothing was ‘admitted’ by the Irish Government except that I might be the Artful Dodger in question reminded me too powerfully of my recent experience in the divorce courts.

However, the legal team sallied on undeterred by their emotional client. And as the government too decided that I was not for turning, the law was rushed through in time for me to run for the European Parliament in Ireland South in May 2014.

I am proud to say I left the electoral count centre in Cork with 11,500 votes under my belt build on nothing more than my character.

I had no money, no party behind me and only four weeks to run my campaign. So much for the Government ‘admitting’ that I was the Artful Dodger.

However, while my character may have passed the moral test, my financial status has not as yet recovered sufficiently for me to be in a position to purchase that rather nice book. So instead the kind lady at Bloomsbury scanned in page 71 and here I attach it proudly. 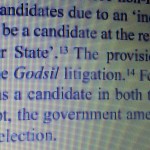 And I thank Ruadhán for his encouraging words to me as I entered the 2014 European race with all the experience of a church mouse. Ruadhán said that everybody should run in a political election at least once in their life. While at the time, that emotional, denying Artful Dodger cursed him for his enthusiasm, the post election, triumphant candidate is deeply grateful for his words.

Victories are more than votes.

I got to put my victimhood under the sword in the process. That, as the ad says, was priceless.

But you can buy the book here 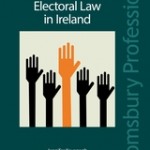