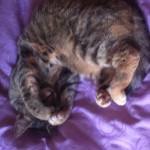 The first we had any indication that there might be trouble was on the Thursday night. Tigger, our cat of some three years, once rescued off the main Carnew to Aughrim road, when not much bigger than computer mouse, but with an enormous capacity to survive a main road, and lungs like a fisherwoman, and a cry as piteous as the orphan that she then was, presented with her back leg paw as swollen as a hockey ball (the football analogy would have been excessive in this feline example).

It required attention although Tigger did not seem in pain. We kept her in the house just in case and much to her disgust, intending to bring her to the evening surgery at our local veterinary clinic.  She puked for good measure just before we left displaying her annoyance at such treatment. Our cat travelling box, while purchased as such, leaves a lot to be desired. It is a wire cage with no bottom, necessitating a towel or similar to cover the base. We tried the canary trick of draping the cage with a cover but she mewled horribly all the way to the neighbouring village, sticking out the three paws that could fit out through the holes and scratching my youngest whose job it was to keep her calm.

In the surgery, the vet examined her and suggested an infection and prescribed injections. These were administered without much panic; although we were glad there were only two. At this stage Tigger had figured out what was causing the sharp needle pain and I doubted we could have kept the vet safe for a third injection. He also provided an antibiotic solution to be given orally in the form of drops.

Home again, home again jiggedy jig, with the cat mewling even more and my daughter now using the towel under the cage as opposed to over it in a vain attempt to avoid injury.  Once home we administered a further oral dose of medicine as instructed which she promptly sicked up on the grass.

Our cat was less frequent in the house after that experience over the weekend. She normally comes and goes as she wishes, but the nasty injection and further nasty oral drops, meant she went more than she came. But by Sunday we were worried. She had not returned for food or medicine. A hunt ensued and we found her asleep beside the bales of hay on the ground in the stables, being too weak to jump on board as would have been normal.

At this point we decided house arrest was preferable to that we could keep her indoors. We set up a litter tray and closed all windows. The smell of sick cat is not good. Then, while she managed to poop on the litter, the smell was awful. Then she continued to vomit, with neither food, medicine or even water staying down. And she sicked all over. On Monday morning, she was a thin reflection of her formal self, she could barely walk, and instead of curling up, lay stiff as a poker, Egyptian-style, with her head trembling before it would sink to the ground in an exhausted and consumptive fashion.  I went for a walk and when I returned I could not find her, she had crept into a small space in a cupboard and looked for all the world as if she was going to die. I brought some fresh water to her which she lapped. Then she vomited again, this time a red mucusy mess. I called the vet. I was bringing our dying cat in immediately, outside hours and in a hurry. They said she would be put on a drip at once.

This journey was longer. We had to go to a different clinic which was open and once in the cage, reminiscent if Tigger had but watched Winston’s rat-filled cage in the film 1984, she set up an equally protesting wail for the entire 30minute journey. She went from death calm to banshee loud in seconds and maintained it for the entire journey. My youngest, again in the danger seat, wondered if people might think we were murdering a cat, not saving one.

Once in the vets she displayed an agility and restlessness that made liars of my near-death worry, but she was sick enough to warrant the drip and more injections. The vet suggested a sedative prior to any needles. My youngest and I exchanged looks. This was a good idea we said.

That night we were recalled to the surgery. Tigger seemed fine if still a little weak. We were to take her home and report back if she did not improve. While my eldest had driven to the surgery, she suggested I drive home as she wanted to hold Tigger on her lap in the cage and with only a dressing gown as a base. Tigger, now as familiar as she wanted to be with Orwell’s classic torture chamber, began her banshee wail just minutes from the car park. My eldest implored me to put the pedal to the medal, in a 97 Micra with no power steering. We were making ground, at the earth shattering speed of forty miles an hour, when her wail sounded different and next minute Tigger was urinating in the cage, easily avoiding the dressing gown and hitting instead my eldest’s jodhpurs and the car seat. Crazily driving the Micra at excessive speed on the country roads I could only fish out a used tissue from the side door. I was begged to go faster but even the gods could not help me there.

At home, Tigger was rushed inside and I was rushed back out to try and clean the car seat. We tried her with a little food and she ate. We tried her with a little water and she drank. She tried the litter with success, creating the headache inducing smell where windows and doors were closed against our would-be escapee. That night, we left her in the sitting area, but she woke us at 2am, then 3am and then again at 4am, scratching to come into the bedrooms. She habitually slept on my youngest’s bed but given her recent vomiting that had been banned. Finally, she, and we, slept.

The next day a recovery was mooted and the doors and windows opened, with the litter thankfully expelled outside. The bandage from the drip was removed, uncovering a bald-like leg. Tigger came and went, ate and went, and seemed pretty much herself again.  I guess that night she needed to prove a point. At quarter to six in the morning a wild mee-ow screech was heard by all three of us. I put my head under the pillows and tried to ignore it, but my two children decided otherwise. The two musketeers thumped past my door to the garden to find the source of the cry and the cause of the matter. With my head under the pillows I convinced myself that they had returned to bed, when minutes later I heard my youngest running back in again. The third, and rather reluctant, musketeer was needed. Groggily I reached for a jumper and my flipflops and went outside. I could hear noises in the middle of the ditch and climbing over the fence and under the trees and around the bushes – no mean feat in my ill-advised flipflops – I found the cat up a tree, that was in the middle of a vigorous holly bush, with my eldest half way up the tree, being supported by my youngest, trying to reach the cat. I was called upon to provide the support to allow my eldest to go higher. This time I crawled over the barbed wire and under the shrubs and finding shaky footing in my flip flops, attempted to take the weight of my eldest under her left boot. She, being of a more serious musketeer than myself, had worn more suitable footwear. At this point, I must point out, it is remarkably difficult to sustain the weight of a young woman, albeit a slim young woman, in one’s hands, while leaning at angle into the tree because the presence of a vigorous holly bush prohibited closer approach and while wearing flip flops on the banked uneven ditch.

Still, she did not fall, more due to the strength of her upper body than my real foundation in my hands. Tigger obligingly moved higher and out of reach and onto another tree. We regrouped and this time my youngest, being the tallest of all three, struggled to reach the cat. Tigger, perhaps sensing that resistance was futile, took some ginger steps down towards us. My youngest reached up and Tigger caterwauled like a feral cat and my youngest almost dropped her, to much scolding by my eldest. But luck was with us and the cat was still held and recovered despite her continued wailing. We reached steady ground but then my youngest said in fright. “It is not our cat,” and dropped her, like I have to say, a scalded cat. “She doesn’t have a bald leg.” The cat, who was indeed Tigger but whose bald leg had fluffed out overnight, was unconcerned. She sat in the middle of the drive and cleaned herself.

Being a bright morning we all trooped off to bed. The children attempted to sleep. The cat ate some more food and slept. The dog slept on the blanket. I booted up my laptop and tried to record this weekend. The next time the children say they want another cat:  I will produce this and read it. Lest I forget.

Post Script 2:  I recounted this story to my mother, sharing the humour with her. Towards the end the telling my mother asked me in a very confused voice. ‘But how did Tucker get up a tree?’  Tucker? I had to laugh. In addition to Tigger the cat, we have Tucker the new foal and somehow my mother had thought I was talking about him and was getting more and more confused especially when I told her he had been found up a tree. How we laughed. The day Tucker climbs a tree is the day I ban all animals from our home.

Posted in Musings on my time on this planet ..., Uncategorized and tagged 1984, cat, cat cage, feline, feral, sick cat, vet.