Aspire Magazine ran my article on Cindy Gallop on the cover of September magazine. 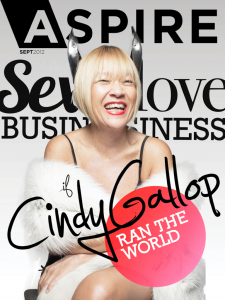 Gallop explained her problem and how she encountered at first hand the direct impact of porn on Generation Y, or GenY. In short, she dates GenY men and has sex with them. This point is only of interest as Gallop would be considered a cougar, and is somewhere in her fifties. She did not seek this departure, but during a campaign for an internet dating client while still working in advertising, she joined a dating site to see what it was all about. At the top of her field, single and very busy with work, she did not want a relationship and stated as much in her profile. To her initial surprise, this nugget of information proved very popular and she was inundated with offers of sex and non-committal relationships from young men.

Gallop stresses that she was not seeking young men and she was moreover very discerning in her choice of dates. This is a critical point as it shuts down those who might argue that her experience was slanted because of her circumstances. Gallop chose to date exceptional young men, at least one encounter mutated into a long term relationship. She is a very intelligent woman; she chose not to date unsavoury types.  But in dating younger men she came across very different sexual mores that had not been prevalent in men her own age or indeed during her previous sexual experiences. There was a whole range of new sexual behaviour that had moved directly from porn into real life and it was not a forward step.  To read more, please visit Aspire Magazine and start your free trial now