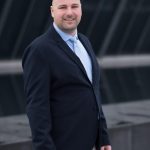 The X8Currency ICO closed early. It reached its hard cap of €3.4million on Saturday, a full week before the closure date. Founder and CEO Gregor Koželj, whose voice is worn out through speaking so much, is very happy. His project, an ultimate safe haven for crypto investors, is a way to provide an alternative to the current financial system.

‘I don’t want to replace the traditional financial systems,’ he explains.  ‘Replacing systems always involves too many hurdles, I want to transcend the current financial system – to offer a real alternative.’

Currency and its fluctuations played a big part on Koželj’s upbringing. Living in Slovenia, he witnessed the deflation of his native currency, the tolar – as a child his savings to purchase a bike were downgraded to only a tyre when the tolar lost its value – and he remembers the value of foreign currency when given as a present by visitors.

‘As a result I have always been fascinated by currency,’ he says.

As a grownup he followed his passion and worked in trading and investment. As head of asset management for a major brokerage he started to notice some unusual results.

‘When working with large funds and say if I held more than 1% or even 2% of total market activity, then every trade I made would lose money – without fail,’ he says. ‘This empirical evidence was hard to explain but it was true. Why did it happen? There may have been a number of reasons but one was that watchdogs in the system are constantly monitoring large movements and penalising the trader as a result.’

As head of asset management he made more than half a trillion in trades and these large volumes were being penalised.  Once Koželj took a step backwards, towards more moderate trades, then he was able to make money again.

‘I went to the principals of the brokerage firm I was working for and explained this discovery but they did not believe me and so I set up my own company, ioNectar.’

Headquartered in Zug, Switzerland, ioNectar is an innovative and ergonomic portfolio risk management platform and is the first trading platform in the world that facilitates Risk Currency trading.

For ten years Koželj worked on the platform, using Artificial Intelligence (AI) to solve his trading problem – that of delivering stability. He incorporated all that he had learned previously and when the platform was finalised, he ported it to the blockchain.

‘There are two core components to the ioNectar platform. The first is the ARM, or Automatic Reserve Management system, and the second is the basket of currencies called X8C,’ explains Koželj. In the two years since the ARM AI has been running I have not had to manually interfere in any way and yes the results have been consistently successful,’

With the ARM AI busily calculating trades every millisecond and providing a scientific value each day, Koželj believes it has the potential to bump LIBOR off the table. ‘LIBOR is set artificially by a number of the main banks,’ he says. ‘But it is pretty arbitrary. ARM AI on the other hand is totally scientific and reliable.’

A side effect of ARM AI is that it can offer stability to the market. ‘This is where the X8 token comes in,’ he says. ‘How much does the market value stability? X8C can only be traded for X8X so that will be a natural valuation.’

Koželj believes his X8Currency is also crash proof. ‘If any one fiat currency fails, there are another seven to provide stability. In fact, even if they all fail, gold is still there. And we have insurance too. In essence it cannot fail. Even if we end up with no fiats, we still have gold coins and they will transition to the next financial system.’

Right now, Koželj is nursing his voice but he cannot rest, certainly not in the current crashing crypto sector. ‘There are very few professionals in this space,’ he says. ‘Crypto has not finished changing yet – there is more to come.’

As he continues working on creating the ultimate safe haven for crypto investors, Koželj will spend the ICO money on hardware and software, more development and marketing. ‘All I want to do is to provide a liquidity safety net – in a fully scientific way.’ That’s all then.

Posted in crypto and tagged bitcoin.