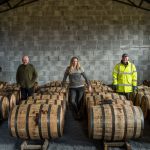 The lost art of whiskey bonding has been restored to Ireland once again after being neglected for almost a century.  Clare-born Louise McGuane returned to the family farm after an international career in the drinks industry to set up a new bonded whiskey warehouse on the farm, on a site nestled between the Shannon Estuary and the Atlantic. This unique micro climate will be used to create a very special flavour of whiskey – the first bottles of which will be available in five years’ time.

Louise has come full circle. She remembers growing up when the local creamery was still operational. ‘We bought the bulk milk tank down to the creamery using the tractor very day. I even remember the pails before that,’ she says. ‘Naturally, those are in the past but the community has retained its rural bearing.’

Now she is reviving another ancient tradition of bonding that had all but died out in Ireland. ‘Back in the last century many local grocers or pubs would also be bonded agents and blend or mature their own brands of whiskey. They bought the plain spirit off a main distiller and then matured it in casks for a number of years before blending their own whiskey.

‘Most local communities had their own whiskeys – all with their own unique flavour,’ she says.

Each whiskey derives the majority of its flavour, some 80%, from the cask or container in which it matures and in the local climate where it resides.

Back in 1930s Ireland, the main distillers began creating brands – such as Jamieson and Powers – and were reluctant to release whiskey to local blenders and so the local versions died out.

Louise has also bought in limited number of litres of aged whiskeys and employs a Master Blender. She will use these matured whiskeys to have her first ‘pilot’ whiskeys ready in September. ‘This is to create a path to market,’ she explains.

It will take at least five years to produce her own whiskey and she needs an active sales channel once the product is ready.

‘Of course, we don’t really know what it will taste like,’ she says. ‘But we do know it will be unique. Our coastal micro climate will influence the flavour, plus we have built a traditional warehouse leaving mud as the foundation. This will both moderate the temperature and humidity as well as ensure no other whiskey will taste the same.’

Louise’s inspiration comes from local Kilrush grocery and bonded whiskey maker JJ Corry. ‘We discovered that he matured his own whiskey locally and sold it in the community. He died in 1930 and I have visited his grave. I also discovered his shop was dismantled and removed to Bunratty Castle where it is now a tourist feature.

‘There was a lot of paperwork remaining in his shop, details about his whiskeys and their names, and so I decided to reclaim his brands. I trademarked them and now we are in production,’ she says. ‘It is wonderful to not only rejuvenate an old tradition but also to rejuvenate his original brands.’

Louise is very happy to be home and on a mission. In the twenty odd years she was away she worked at the top of her profession in sales and marketing for some of the biggest luxury names in drinks. She worked in the US, the UK and Paris France. Her contacts and experience are invaluable. While away, she and her husband saved up to renovate her grandmother’s house on the farm. Initially it was intended to be a holiday home but she realised in recent years that her career would keep her an international nomad and she wanted to come home.

‘There is something very satisfying to return home to a project like this,’ says Louise. ‘I looked at a number of possible projects but this one felt right. The barn, which currently holds 24,000 litres of maturing whiskey, looks as though it has always been there. That continuity is important to me.’

Louise initially crowdfunded to finance the proof of concept raising €45,000 through KickStarter. ‘That came mostly from the US and was without the sniff of a whiskey product. I knew we were onto a winner at that stage.’

She is currently working with a number of private investors and may turn to the EIIS tax relief scheme. Right now her project is eating money as the whiskey quietly matures on the farm. Down the line, Louise has plans to integrate tourism into her project, handling small tour groups before moving them off to the local pub for food and refreshment. In time too she is looking at parenting with a local brewing company.

‘I love being home on the farm,’ says Louise. ‘My parents are still going strong, farming beef and diary, and I love being part of the lifestyle and community.  While our first blends will be available in less than six months we will spend the next five years watching our whiskey, opening the casks and checking on the maturation process, helping it where needed and finally creating our final taste. It is a long, gentle process but I am excited already about the final product.’

Louise will have to patient. Her whiskey will mature all in its own good time, and not a moment sooner, surrounded by her parent’s inquisitive dairy herd and the every present flocks of seagulls.