Listen here to a pre recorded version (without tears)

Presentation Arts Centre in Enniscorthy is the most perfect building. An old convent, the conversion to secular building retains the stained glass windows and ornate carved wooden beams arching overhead. When one walks into the hall it is breath-taking, literally, in its beauty. And, as with all ecclesiastical architecture, the acoustics are impeccable. This was the venue for the ‘Open Mic’ run by the Wexford Focal Literary Group and I had been very kindly invited to read. It was my first public reading (unless one counts a reading at EroticaUK of a slightly different nature) and I was relaxed as a newbie on their opening night which is not very much at all. Still a glass of red wine and a lovely welcome from guests already assembled soon calmed those incipient nerves. 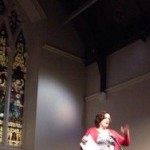 I had another practical reason to feel nervous. My youngest child had just begun college in Dublin and had, it seemed, emptied her bedroom lock stock and barrel to her digs in Dublin. The tidy bed at home did not look lived in, at least not the way it was normally strewn with clothes, books and electronic devices. She had taken other items from around the house, in a weekly drip drip loss of goods. On the last return to Dublin the printer had been the official casualty and now resided snug in her new digs. As a result I had to ring her and ask her to print out my reading. I am pleased to say my daughter has become parsimonious in her new student life to the extent that she managed to fit my 2000 or so words onto just three pages by using tiny fonts and carefully printing on both sides.  I was less pleased that I would now have to read the tiny text on stage and had resorted to digging out a pair of random reading glasses – the thick, cheap kind you find at shop tills – with which to tackle my work.

I was up first which was, like the curate’s egg, good and bad in parts. I was glad to kick off the evening but I was also uncertain how to behave. I opted for standing at the mic rather than sitting as I was wearing my brand new shoes. They were bright red in colour and never worn before. I had driven the forty minutes to Enniscorthy in them so that they were settled in but I think I miscalculated. By two hours they were killing me with a passion. I reckon I should have waited until I arrived before wearing the murderous duo.  I am familiar with the term ‘car to bar’ shoes but I am not sure how I managed to buy a ‘killer heels’ with the emphasis on killer.

The second thing that happened to me was on stage, mid reading. I was reaching a part of my narrative which talked about the bonehead banks and how they were responsible for my being bankrupt. I had received an offer on my house but they refused consent to sell, preferring to repossess my home and sell it for a tenth of the price. The escalating results were catastrophic and while they certainly resulted in the loss of my home, my income, my business, my belongs – they almost certainly resulted in the loss of my life. I know this part of my story, I have written and told it before, but as I reached these lines I found emotions wellsprung in me and I faltered, my voice broke and I almost cried and pulled up in my reading. But I found the courage and the voice to continue. I got through my emotion and carried on reading.  What was funny was afterwards I spoke with another writer and she complimented me on my reading but it transpired she thought I had cried for effect. I am not sure whether this is a compliment or not.

Finally, yet another writer and speaker told me she had gone bankrupt too – at the early age of 21 in Australia. Afterwards I pondered was it better to go bankrupt early or late. I thought about this for a bit but I reckon early is better – it gives more time to recover, less hurt to be felt and less loss to be suffered. Young people know there are invulnerable, older folks are less sure.

Until the next time …