I always think the first week back in January is the toughest. The Christmas decorations are still lying about, there are leftover mince pies in the canteen if anyone could stomach them and we travel to and from work in darkness. We spent the weeks leading up to Christmas and the New Year in a mad panic to see all our friends, spend time with our family and text the world and his wife broadcast New Year wishes.

Then suddenly it stops. No more crazy shopping, gluttonous eating and seasonal drinking. And our wallets are considerably diminished. Before the darkness was lit by crazy lighting of every kind, now these are dismantled and all we have is car lights and windscreen wipers sweeping rain and oncoming beams out of our eyes.

And someone says, Can you see the stretch in the evenings?

Just before Christmas I was interviewed by the Wicklow People to ask about my New Year’s Resolutions and I attach the copy here. I have five resolutions in total. As I stand on the far side of Christmas and firmly in the New Year, I think my last one is the most important – Kindness; having the grace to receive it and the energy to pass it forward. I think 2013 will be a very tough year for many people. I believe it will be harder than 2012 as we face into the real impacts of the budget. I implore everyone to look to the right of them and to the left of them. There will be people – family, friends and colleagues – who are suffering real privations and enormous stresses and crippling hardships. They may not be able to share their suffering but if we can be kind, perhaps we can help.

Now abideth Faith, Hope and Charity (Love). These three; but the greatest of all is Love. 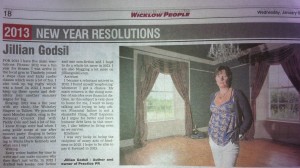 2012 was a fun year for fitness. I was active in the local gym in Tinahely, joined a steps class and kicks cardio classes which were a lot of fun. I also took up tag rugby which was a hoot! In 2013 I want to keep up these sports and definitely join another summer league for Tag. I had forgotten how much fun team sports are and really enjoyed my time in Gorey Rugby club.

2012 was a fun year with my choir, the Wolseley Singers in Tullow. We practiced most Monday nights, sang in the National Concert Hall with Paddy Cole and had a lot of fun. I know things were bad when I sang guide songs at our after concert party! Singing is better than sex and chocolate according to Maria Doyle Kennedy and what can I say – I’m going to be doing lots more singing in 2013

Every writer battles for time to write and can make excuses why they don’t just write. In 2012 I drafted two books, one fiction and one non-fiction and I hope to do a whole lot more in 2013. I am also blogging a lot more on jilliangodsil.com. I think I have found another thing to rival the enjoyment of singing – writing!

I became a reluctant activist in 2012. I found myself ‘soapboxing’ whenever I got a chance. I don’t know what the future holds for me, my kids or this country, but I feel passionately it is my obligation to speak out about injustice. My main concern is the rising number of suicides over financial distress. As this subject is very close to home for me, I want to keep talking and trying to help others. Financial failure is not a shameful thing. Stuff happens. As I argue for better and more humane debt laws in this country, I also believe in living even as we survive. I have been helped by many kind people and I encourage people to look to their neighbours  – maybe they need help too.

I was very lucky in being the recipient of many acts of kindness in 2012. I hope to be able to pay it forward in 2013.