Ken Anderson, admin of the official Hashgraph Telegram Dev Group as well as CTO for Irish ICO Mingo, believes that Hashgraph has the potential to either eliminate or upgrade the many issues facing the Blockchain.

‘It makes sense that the next step is not another public Blockchain, but a new distributed ledger technology,’ he says. ‘Development is all about improving technology, not getting a piggy back just for the sake of it.’

Maybe it is his background as an ex-Military Intelligence Specialist in the US Army that makes Anderson somewhat fearless when it comes to evaluating new technology. ‘I’m committed to vetting Hashgraph,’ he says.

Anderson and his developers in Mingo have been given permission to go inside the technology but it will be several months before he will commit to his final verdict on the new distributed ledger.

So what is Hashgraph and why might it have the potential to overthrow Blockchain?  Firstly, it should be noted that the Hashgraph platform, which is a distributed ledger developed by Swirlds, is currently a private ledger, does not have an ICO planned nor does it have a cryptocurrency.

It does however, take some pretty big swipes at the problematic issues facing Blockchain.

‘If you asked me to say why Hashgraph is looking so good, I’d have to say it is because it addresses issues such as speed, size and fairness before we even look at the core elements of Hashgraph which is also provable, Byzantine, ACID compliant, efficient, inexpensive, timestamped, DoS resistant, and optionally non-permissioned,’ says Anderson.

Then there is the issue of Proof of Work (POW) in Blockchain. Originally conceived as a consensual and fair way of allocating rewards to miners there are difficulties.  In Bitcoin, miners can control the order of transactions – often on arbitrary terms. Given that Bitcoin can never 100% guarantee confirm a transaction, despite the more blocks moving towards consensus, this creates an inherent, albeit random, bias in the system. It also one of the main reasons mining is so expensive.

Hashgraph on the other hand operates a consensus time stamp approach which means no miner can sideline another and all blocks are accepted in the chain, purely on a timed basis.

In Hashgraph once an event happens everyone on the network knows this. In addition, since there is full disclosure on the network then old blocks can be consigned to history and discarded if wanted. This shrinks the amount of storage from Bitcoin’s current 60GB to a fraction of a single gigabyte. That would even fit on a typical smartphone.

Much of the problems in Blockchain development and future direction also lies in the difficulty by which consensus is achieved – it is not a given but only a growing probability which can lend itself to hard forks and slow reactions to changes.

Hashgraph on the other hand uses the Byzantine fault tolerant protocol. This means no one individual can stop a decision, nor can a decision be reversed by an individual. To maintain this progress Hashgraph also uses Gossip about Gossip protocol. This protocol is well known in the programming community where nodes exchange information to every other node randomly, no one is left hanging and every bit of information – or gossip – is shared on the chain.  Therefore how each node will vote is known in the chain as well as what each node knows and when it got that information is time stamped. If there is an affair in the village then everyone knows about it. This is one village not to plan adultery if you want to stay married.

Currently Hashgraph is a private distributed ledger so it will take people like Anderson to evaluate its claims. If they are right – and it is faster, safer, fairer, cheaper and better as claimed – then it looks likely Hashgraph will give Blockchain a run for its money. 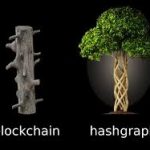