And also in a wonderful short video by Ronan McGreevy at the exhibition. Watch it here or below. 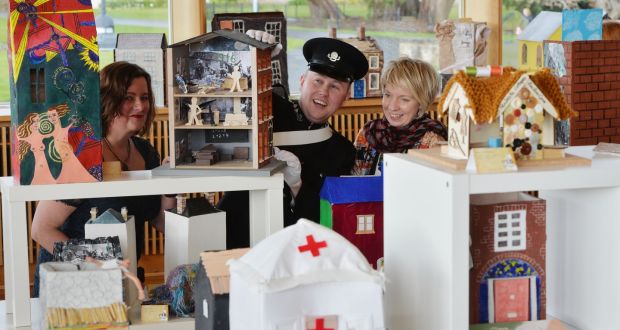 A unique free exhibition celebrating 1916 is open in the National Botanical Gardens from this week until April 24th. The exhibition, called the 1916Sackville Street project, was developed to celebrate the largely forgotten and ignored civilian deaths in 1916.

Until this year, little was known about the civilian dead – indeed few people realised that the number of civilian dead exceeded that of the total military casualties on both sides. In all, 262 innocent men, women and children were slaughtered on the streets of the capital during the first week of fighting.

The 1916Sackville Street Art Project invited students, individuals and organisations to build art homes for the dead – to provide a final resting place. Indeed since many of the civilian dead were amongst the very poorest of the city some bodies were never claimed and to this day they lie in unmarked graves.

Former High School Dublin student Jillian Godsil was invited to assist in the project and with Laois public relations consultant Dave Delaney they voluntarily provided the PR and marketing expertise. This weekend project has featured on RTE news and Nationwide as well as the national press.

However, as both Jillian and Dave worked on spreading the word and finding people to build homes they became increasing interested in the personal stories of the project. Dave decided to focus on a young man called Paul Reynolds and during this research discovered that he had been twenty years of age and a journalist.

‘What really upset me was the fact that his body lay unclaimed in the hospital morgue until August when a Rev Reynolds claimed and buried him,’ says Dave. A journalist and artist himself, Dave built a house covered in newspaper. His house is now part of the exhibition in the Botanic Gardens – a permanent memorial to the young journalist.

Jillian too became more involved. As the names were claimed she saw one persistent name not taken. It was an unusual name – Holden Stodart. 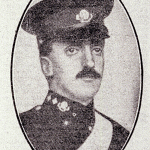 ‘I looked at the name and tried to imagine the man. I too have a strange name and I was drawn to him,’ says Jillian. ‘I decided to claim Holden and make a house, indeed a home for him. Imagine my surprise then when it turned out Holden had attended my old school in Dublin, the High School. I felt an immediate connection.’

Further investigation turned up that Holden had been a St John Ambulance volunteer. Holden was in his 30s, and was married with a small child. As the Rising began, rumours of the fighting spread across the capital. In response more than 600 men and women of St John Ambulance turned up to volunteer for service. Holden was a senior officer in St John Ambulance service and he was responding to the terrible battle in Mount Street on Wednesday when he was shot dead trying to rescue the injured. He was the only St John Ambulance member to lose his life in the violence. 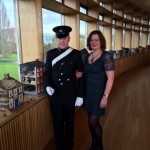 Padraig Allen, St John Ambulance volunteer and archivist, dressed in the same uniform as Holden Stodart would have worn with Jillian Godsil

‘I found it very sad that his sacrifice in saving the injured has largely been overlooked in the last 100 years,’ says Jillian. ‘I approached my old school, where I was a President of the Alumni, and a super bunch of young people in Transition Year agreed to make the actual house. It was finally modelled on the old school building in Harcourt Street and now lives in the exhibition as well.’

In total there are 262 art houses on display in the National Botanic Gardens in Glasnevin. Entrance to the exhibition is free and in time a book of the houses will be available for sale. The exhibition runs until April 24, 2016.

1916 Sackville Project: Holden Stodart – the Team behind the Project

We decided to base our project on Holden Stodart, who was born in 1883 and was a post pupil of The High School at no. 40 Harcourt Street. He worked as a clerk at Guinness before he volunteered with the St. John Ambulance Brigade. Holden became St. John Ambulance’s superintendent and was put in charge of Baggot Street Hospital to look after the wounded after the Easter week. Holden Stodart was shot near Northumberland road where he went with a stretcher party and other members of the brigade treated the soldier. Holden was killed instantly. Holden Stodart lost his life on April 26th 1916, aged 33.

We decided to base the house on no. 40 Harcourt Street as this was where Holden Stodart went to school. It also became a temporary hospital, used by St. Johns Ambulance to care for wounded soldiers during the 1916 rising.

The Manufacture of the Project

The class were split into four groups with four pupils and each group were given a different task.

First we spray painted the walls a red brick colour. We then cut out the windows using a Scroll saw after marking them out on a piece of paper. We then got a scalpel and carved lines to imitate the brick patterns. For the top of the gable wall, we cut and sanded it so that the roof would fit on top. We then cut the window sills from plywood, painted them white and glued them in. We also added a handle and a letter box to the door.

We decided to base the ground floor on the High School to represent the start of Holden’s life. We made desks to represent the school classroom. We were going to put carpet on the floor but then decided against it because we thought the school might not have carpet and only have floor boards during this time. We put posters and other pictures around the room to make it look like a school classroom.

We decided to base the second floor on the 1916 Rising where Holden Stodart lost his life on April 26th 1926 aged 33. We cut out different figures and guns from plywood and painted them appropriate colours. We stuck a picture of Holden on the back wall as a memory of his life. The mirror on the top represents the fact that it could have been anybody, including you, that lost a life during the Rising. 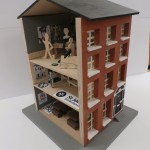