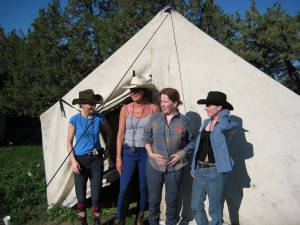 Some years ago I went on a cattle drive in Montana. Wow, that’s some sentence in itself. When I am old and grey I shall surprise my (as yet unformed) grandchildren that the doddery old woman in front of them once cantered across US plains rounding up cattle with cowboys – just like in the movies. I wonder will they believe me or think it merely the ramblings of a senile old woman.

Anyway, it is true. Some years ago I went on a cattle drive in Montana. I have the pictures to prove it, even if the memories fade in time. Before I went my main worry was the lack of sanitation. We were to camp in tents and while porta-loos were provided, or porta-potties as the cowboys called them which creases me up to this day, there were no showers for the first three days. As I habitually shower first thing every morning I was freaking out about this privation. I know – first world problems.  Advised by people who had undertaken this trip previously I stocked up on baby wipes, enough to clean the bottoms of an entire nursery if truth be told.

The first evening we ranged in a big circle and met our cowboy guides. I was in a party of three other Irish girls and we were given the hunk of the cowboys as our guide, much to our delight. A perfect gentleman he flirted gently with us all across the week, earning a large gratuity from each at the end.  We are still friends on Facebook and he is now married and a father. Although he did fall just a little bit on love with one of group: a cowboy romance that fizzled out through geographical distance. 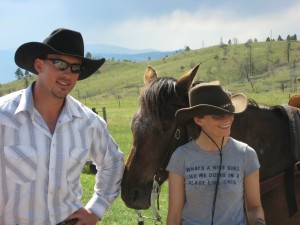 Anyway, back to the privations. We slept in large tents with foam mats to cushion our sleeping bags. Sleep was not a problem, aided as it was by copious amounts of beer the night before.  I woke at six but already the chuck wagon was in preparation mode. I had hoped to get up early and wash thoroughly at the water station. No chance unless I wanted to emulate the bathing beauties on the Celebrity Jungle Television programme. Instead the baby wipes were taken into the porta-potties and desperate attempts made to clean as much flesh as possible.

I found after a day or two, it didn’t matter so much. The weather was warm and we were in the open. I am sure if I had to walk into a crowded lift back in civilisation I might have emptied it at the first floor, but it wasn’t noticeable in camp. And on day four we arrived at a farm that had showers, only two for about thirty slightly smelly cowboy tourists, but the tiny trickle of lukewarm water was heaven. 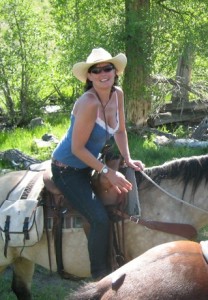 Montana is called God’s country and with good reason. Some days we herded cattle on what seemed like moonscapes such was their vast size. And of course we had no mobile coverage which induced a calm, trance-like state of consciousness. We rose, ate, herded cattle until lunch, ate, herded again until dinner and ate yet more great nosh. We had no responsibility except to feed and water our horses and even then our cowboy guide did most of that. I remember one night talking to an old cowboy. He had escaped plane crashes, car accidents, train crashes and even horse wrecks. At that time I was learning to deal with teenage tantrums at home. I asked this sagacious cowboy why did kids have hormones – it was so unfair on them and on us! He answered that it was so they could leave home. It was their way of leaving the parents and becoming adults. It made utter sense and felt like a light bulb moment. Of course, that made sense.

Last week, I was speaking with my friend Barbara Scully whose blog, From My Kitchen Table, is well worth a visit. I told her my story and what I had learnt in Montana.  Barbara agreed and said exactly the same, and pointed out it was a similar case when parents get old and crotchety, that too was part of the leaving process. I laughed so hard. I needn’t have gone to Montana to learn this truth; a trip to Cabinteely would have done the trick! 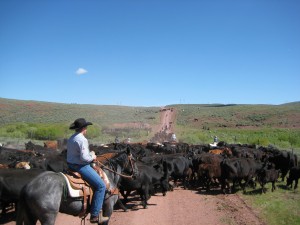