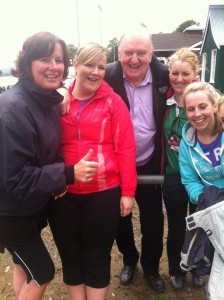 I was built for comfort, not for speed. I knew this as a child. Although taller by a full foot than most of my contemporaries, I never won races. Looking at me it was a surprise: long and leggy, I should have been fast, but my abiding memory was of running my hardest and yet still seeing titchy things overtake me on the track and win. My school sports were hockey and tennis, neither of which I excelled at. A brief spell in goal seemed to suit me and I even made the senior team and went on tour to Wales aged 13. Too young really to enjoy this freedom as I did not drink and was very much the baby of the team. But my niece was born while away which was wonderful and John Lennon was shot and killed which was not. The Wales of my memory will never be the same again. After a few close misses with hockey balls flying past my face, I opted to return to the field again and finished my school sports career in my final year as captain of the Thirds: the captaincy of which came as result of my age and not any skill. Most girls with little or no athletic ability tended to drop team sports by their final year in school, but I just played away blissfully ignorant of my lack of talent, and more notably, speed.

Ah, speed. This is why I am writing blog today. After a hiatus of some years I have returned to team sports this summer. When I say some years, I mean a great big sum of them, as in almost 30 years. A dear friend texted me at the start of the summer and asked would I join a tag rugby team in Gorey, Co Wexford. I baulked at first, then warmed to the idea. I am naturally active, again without any particular skills. I learnt to horseride after my divorce and went on to win small jumping competitions, went on an amazing cattle drive in Montana and an equally stunning equestrian safari in South Africa. I have joined the local gym, attend classes with regularity and use my treadmill often. I like to walk. I also sing, write, socialise and enjoy pubs. But it has been a long time since I did any team sports and so four weeks ago I rocked up to Gorey Rugby Club feeling excited and a little bit nervous.

How hard would it be I thought. I’ve brothers who played rugby at senior levels. I’ve grown up in a rugby family, went to a rugby school and spent many, many hours cheering on my team or country in rugby matches. It was only when I arrived at Gorey and saw everyone warming up that I suddenly realised I had never chucked a rugby ball round with my brothers in the back garden, ever. I almost turned tail there and then but my good friend persuaded me to stay.
Fast forward to tonight. Learning a new sport is tough, even in a friendly environment. Tonight was my fourth match and boy was it fun. For starters there was no rain, a first in this summer league. I am not sure why but every Thursday it has been bucketing down with rain. At least two nights have been cancelled and last week we played despite the stair rods of rain coming down. At first I was very grumpy but once wet it really doesn’t matter. Running around in the pouring rain is actually quite good fun in summer. It wasn’t cold or rather we weren’t cold. And surprisingly I got a try. Don’t ask me how but I was in the right place at the right time and touched it down! Go Me!

Tonight was very funny and it all goes back to speed. Girls get three points for a try, boys only one. So the emphasis is on getting the girl over the line. At one stage, a teammate shouted at me: “Stay Up,” and I did try but my legs while long are not fast. I don’t know why. I think I run a bit like Phoebe from Friends and I was miles from him at the touch down. Epic fail. Later on, the same teammate looked at me and looked at another girl on the team. Although we were all neck and neck and no one was marking me, he still passed to her. Sadly she was tagged and missed the try. It was a good call based on my lack of speed just unfortunate in its ultimate execution.

Half time came and I promised to try and run faster. And not be scared of dropping the ball if passed to me. I would call for the ball. My time came soon enough. A late run and I was twenty feet off the touch down. I went into my top gear and ploughed on. I was tagged but did not realise it. I was running so fast I could not stop and ploughed into the hedge at the perimeter of the field and got stung all over with nettles. Now, this was playing. I was running so fast I could not stop. A result albeit it without a try.

Five minutes later and getting very close to end of the match and again I was up with our side. The ball came my way, I caught it and ran on to the goal line. Touchdown and into the hedge after. TRY! Loads of nettle stings. I’d taken one for the team! And got a try!

I am now officially the highest scorer on our team. Nothing to do with talent at all. But I have the nettle stings to prove it.