I am a woman: do not fold, spindle or mutilate.

I am a woman. I am in my forties. I have two teenage children. I am divorced. I like sex. There, I’ve said it.

Why am I telling you this, dear reader? Well, I posted what I believed to be an amusing, tongue in cheek report of what it was like to meet Michael Fassbender. To give you context, you can click here, or just to say that given the furore about his penis in Shame I found myself literally without words when I met him. All I could think was ‘don’t mention the penis, don’t mention the penis.’ I felt as though I was stuck in that funny Faulty Towers episode when German tourists stay in the eponymously named hotel. Basil keeps on telling Polly ‘Don’t mention the war.’ Of course, Basil does it himself numerous times and ends up doing the goosestep ala The Monty Python school of funny walks. So as I looked at Mr Fassbender all I could think of was his penis. I didn’t mention it at the time, in fact I said very little to him at all. My quirky article went on to talk about how men apparently objectify women in a similar manner and I applauded them for managing to speak coherently at all. Simples.

However, it was the reaction to my piece that struck me as very strange. Many of the comments were quite incensed as if I had offended the readers personally. I was repeatedly referred to as a middle aged woman. This label was used not a general reference but in an accusatory fashion. I am also about the same age as Brad Pitt and a bit younger than George Clooney, but I don’t recall them being labelled as middle aged, not yet anyway. The fact that I was mother to teenage children was also held against me, how could I possibly think about a man’s appendage when I was a mammy? Actually, the presence of such an appendage in my marriage was the very cause of my becoming pregnant and having children. So why, eighteen years on, would I have to eschew all thoughts of the male member, or heaven forbid, actually dare to talk about it.

Recently I watched It’s complicated starring Meryl Streep and Alex Baldwin. The plot revolves around them as a divorced couple having an affair with some pretty steamy sex. My two teenage children both laughed and said they found it funny to see ‘old’ people having sex, but they are teenagers. To them anyone having sex is embarrassing, especially anyone over the age of thirty. However, it is an irrefutable fact that people continue having sex well into their latter years. I suspect, and this is only my opinion, they do so because they enjoy it. And another fact is that roughly half of those older people in Ireland having sex and enjoying it, are women.

So, in conclusion, I’m not quite sure how come I managed to upset so many people but I would like to reiterate that middle aged women, like their middle aged male counterparts, like sex too. 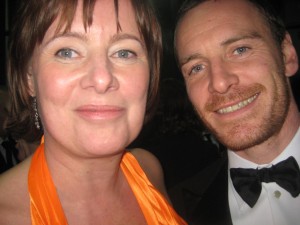 Michael Fassbender is the latest overnight success in the Film business. From his authentic and critically acclaimed role as hunger striker Bobby Sands in Hunger in 2008, he has notched up a series of high profile roles in equally high profile films, making him one of the most bankable actors today. From Jane Eyre to Inglorious Bastards his screen presence has grown in stature, while his role in Shame, directed by his old Hunger partner, Steve McQueen, has earned him credits in a slightly different direction. At the Golden Globes ceremony this year George Clooney thanked Michael for taking over his responsibility for full front nudity in film, and went on to say he believed Mr Fassbender could play golf with hands behind his back. All jokes and tributes to Mr Fassbender’s best support which continue around the globe.

At the Irish Film and Television Awards (IFTAs) inDublinrecently I met with Michael Fassbender and I was rendered speechless.

Ah, the sounds of silence. There have been a few. I remember a tutorial on the origins of the Spanish Civil War. I had prepared and researched the topic but had not managed to write a concluding paper. As my patient, and also handsome professor (maybe there is a trend) gently prompted me for the main cities in Spain all I could think of the party fuelled and package filled Spanish resorts of Magaluf and Torresmolinos.  None of which may have existed even as hamlets in the ‘30s. My professor took pity on me and took the tutorial.

I remember too the start of my finals in university. The opening question on my first English paper was utterly incomprehensible. My brain emptied of all words and I starred goldfish-like at the paper for a full five minutes until secondary resources took over and sense and words and knowledge came tumbling into my brain, like a returning wave and washed over me and my exam rictus.

Or by the campfire in Montana while on a cattle drive and resting one evening. I was listening to an erudite and learned old cowboy. He had survived car crashes, plane crashes, helicopter crashes, even horse wrecks. I listened to his stories and my mind just stopped. It was as though he had opened my head like a boiled egg and poured his wondrous stories straight in: soothing and calming and I had no need for words.

Or when on a final equestrian trek in South Africa, our group had to half swim on horseback in deep water before scrambling onto partially flooded banks and canter along the game fence. All the while, the heavy hippos called loudly to our left, splashing solidly in water only feet away. My mouth stopped then too but it could have been a combination of fear, the noise of the hippos and water crashing over us as we cantered. I may have laughed, crazy as a loon, as I held on for dear life but no words formed in my sheer joyful terror.

Or when scuba diving in Fiji on my honeymoon. We sat on the edge of a tiny motor boat, my new husband and I, with two silent Fijians. At the signal, for words were not used, we put in our mouth pieces and fell backwards into the water. Splash and deeper watery sounds rushed past my ears as we submerged into the cool waters of the Pacific Ocean. I could not speak of course but dared not even think. In the lost and semi dark light we trailed our guide down to the reef. Bubbles of air floating upwards in place of words. At 60 feet down the sea was too heavy for me. Making the ‘up signal’ and far from all right, I excused myself and returned to the boat. Spluttering and coughing as I scrambled on board I tried to find words to describe how I felt and failed.

Ah, meeting Mr Fassbender. At the crowded smoking area in the cold outside the function room where the glamorous gathered to smoke, I found myself at his elbow. He was happily chatting with a circle of people, some of whom were at my table. I paused, I listened and when no suitable break in conversation could be found, I tugged instead his sleeve like a child.

He turned and smiled at me and I said that I just wanted to say hello. He smiled some more and so did I, but my mind was empty of all words, adjectives, capitals, nouns, tenses, commas and punctuation in general.

Instead I had this overwhelming image of his phallus. It was the metaphorical size of the elephant in the room, pun intended. As words failed me, the image grew and grew in importance and stature. It was palpable between us as my brain grew this impediment to speech. Finally he asked my name and I stammered it but then excused myself blushing.

So this is my question. Men by many accounts are prone to see women, especially attractive women, by the sum of their body parts. I have read repeatedly and have been told ad nauseum, men see not the face but the rack, not the smile but the legs. They have an advanced peripheral visual acuity which allows them to view the body parts without necessarily allowing the eyes to drift too obviously.

With such sensitivity, how on earth do men make sensible conversation when presented with a beautiful woman? Or have I answered my own question as to the generators of tongue-tied would-be suitors in this world.

Girding my metaphorical loins to counter Mr Fassbender’s imagined ones, I returned to the scene of my speechlessness and requested a photograph. He kindly obliged. I was still incapable of coherent, elegant or intelligent conversation so I finished off by asking Mr Fassbender would he launch my book. He agreed before legging it into the opposite direction at speed. He must has known the silent ones are the most deadly and took his rapid leave before my motor skills returned and I could summon up new and more fanciful requests. A dance, a date, or marriage perhaps?

So having being in the place of awe where my entire being had been focused on unmentioned phallus of Mr Fassbender, I must reluctantly applaud you men. Genetically pre disposed to dissecting women into genital titillation I wonder that you can function at all in the presence of a beautiful woman.

If I had stayed any longer I fear that old Beverly Brothers’ line would have made an appearance. ‘If I said you have a beautiful body, Mr Fassbender, would you hold it against me?’

However, having since regaining my capacity for words (more than a 1000 in this musing) I now just wait for Mr Fassbender’s availability to launch my novel, aptly entitled ‘Running out of Road’

Posted in Musings on my time on this planet ..., Uncategorized and tagged faulty towers, good men project, michael fassbender, the journal.