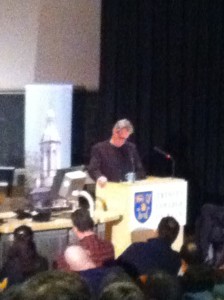 My sister was singing for Hillary Clinton.  I was attending a reading In Trinity College. Late of course, I crawled my way through the rain-inspired traffic that choked the Dublin streets.  Hillary’s convey passed us with a full police escort. We pulled over by Lesson Street as the forerunner guards on high-powered bikes cleared a path through the steamed up, bumper-to-bumper cars. We drummed impatient fingers on steering wheels as official saloons, corporate buses and defence force coaches forged a path like geese through the built up crush of vehicles. As they passed, we swarmed back into the road and carried on with a grim determination as if sheer dint of will would force the car in front to move faster, or to move at all.

My sister was singing for Hillary Clinton. I was hoping to reach Trinity College by 7pm but the traffic and the rain and the convoy were all stealing my precious time away. As I rounded onto Dawson Street, I saw more yellow flashing lights and guards and cars and yellow tape tied across the road. The traffic was corralled down Molesworth Street, which suited me as my destination carpark lay this way, but even as I stretched my rubber neck I could not see the cause of this new and significant disturbance.

The Arts Block door was closed, abutted as it did up against the taped-off junction. I hurried around to the front entrance for Trinity and heard a man ask a guard. “Was anyone hurt,” he said. The guard replied,” Yes,” but refused to give any further information. I hurried on, for I was very late. My sister was signing for Hiliary Clinton.

Racing across the cobble stones, I made the Arts Block at 7:15pm and gained the Edmund Burke Lecture Theatre at 7:20pm. The object of my attention, Sam Shepard, was just being announced. I sat down, warm and flustered, happy not to have missed anything, upset for the accident outside.

I was listening to readings by Sam Shepard. His voice was low and quiet and sometimes I strained to hear. He ran his hand through his hair a lot. He wore glasses and looked up at us, the audience, as he read. He eyes raked first one side of the auditorium, then the other, sharing the largesse of his view.

He made us laugh in places and we saw, rather than heard, the insides of American diners, wood clad houses and porches overlooking lawns. Sometimes his voice rose a little as he launched into the tune of his prose – when you die he repeated. When you die, everything is gone, you see angels, you meet your maker, it’s the end of your life.

My sister was singing for Hilliary Clinton and I was listening to Sam Shepard. I wondered if his car had passed her journey into town.

The cold of a grey, wet, Irish Winter night had gone into Mr Shepard. He sniffed as he read: audible and interruptive.  Towards the end of the hour a harsh female voice from the middle of the theatre told him there was a tissue on the desk. We collectively held our breaths. From her tone, it was hard to hear if she was being considerate or accusatory. Either way, it smacked of rudeness, and we only let go our collective breath when he swatted her comment away as if a fly. He carried on, but sniffed less.

Then he invited his long-time friend and musical legend Patti Smith onto stage with him. She read a piece they had written together, fully clothed and in bed one night. Then they sang a ballad. His creaky voice strangely attractive and her fluid tone melding well in harmony. I wondered if she should be singing for Hilliary Clinton in Dublin that night, instead of my sister.

Afterwards, I shook his hand and told him I had no idea he was so droll. Sam said, “Droll?” “Yes, droll,” I replied and imagined I detected a dislike of the word.  But I shook his hand firmly to tell him how much I enjoyed his droll prose.

The Arts Block entrance was open again and I crossed out beside the tape. It was like a scene from a film set. Two buses, a tent and police cars stacked across the empty street.

I was now to attend an Art House in Dalkey. A friend of a friend, Gerard Byrne, had opened his home to showcase his paintings. A self-taught artistic genius, his paintings were vibrant and colourful. His charcoals were intense and detailed.  I was greeted by his mother who did not know my friend. “Is he handsome?” she asked. Startled, I replied in the affirmative.  Regardless, she fetched me a glass of wine and I wandered through the rooms. The paintings covered every stretch of wall, downstairs and upstairs. I found the charcoal art the most haunting. There was a sketch of a house that I wanted to buy, had I but the funds.

The Babylon sisters sang, their voices melting together like the finest chocolate surprise, all dark and gooey and rich. We joked about the wine. Had Gerry purchased it prior to the budget? We spoke of the country and it floundering under a sea of debt. I mentioned I had shaken Mr Shepard’s hand, had complimented Patti Smith on her singing and had witnessed some form of accident bad enough to cordon off one of the busiest streets in Dublin. I forgot to mention that my sister was singing for Hilliary Clinton.

I reached home at one, tired but quiet. I stacked the children’s dishes into the dishwasher. I put on a kettle for my hot water bottle.  I let the dog out for a run. I turned on my PC and checked my mail. I learnt then a man had fallen under a bus on Dawson Street and had been decapitated.  Foul play was suspected. I had seen the bus and the tent that covered his remains.

My sister had sung for Hilliary Clinton, I had shook Sam Shepard’s hand, complimented Patti Smith on her singing and had seen a charcoal painting I wanted but could not afford. And a man had lost his head and life under the 145 bus on Dawson Street.