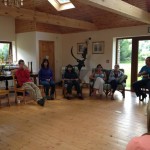 There was about twenty of us ranged in a circle in the Wilderness Lodge in Glemalure, Co Wicklow, of different ages, nationalities and backgrounds. We were on a retreat, for some of us our first ever such experience, on an Internal Alchemy and Qi Gong workshop which was to last two days.

We were asked by our instructor, affectionately referred to as the Mayo Monk, for our reasons for attending. One by one we gave our answers and they hit a refrain of wanting to de-stress from our busy lives while connecting with our inner selves. 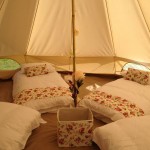 We were glamping in the field beside the centre, in bell tents beautifully decorated and furnished – only luxury surroundings for our poor stressed bodies. And the food, well we were to be fed like kings for the weekend with home-made dishes and salads and bbqs and endless cups of green tea.

Ok, first let me explain the theory about Internal Alchemy. In this ancient Chinese discipline, it defines the five essential elements that make up the body; fire, water, wood, metal and earth. Each element is attached to a primary organ; fire to the heart, water to kidneys, wood to the liver, metal to lungs and earth to the spleen. Individually they work to sustain and balance the organs. The practice of qi gong and internal alchemy is to open up channels in the body and allow a free flow of energy to connect these elements. Illness or emotional distress is believed to be the result of these elements becoming weak or disconnected. 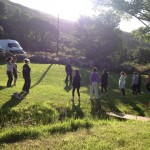 We did a lot of exercises to connect with the earth and also with the other elements. We were taught to stand with our bodies rooted in the earth, making it virtually impossible to push us over. We were taught to breathe so that we used the whole of our lungs, creating ‘Buddha bellies’ as we filled our lungs to the maximum and pushed our diaphragms down. Actually, breathing was one of the most important parts of our training and exercises. Overlooked in its daily crucial importance, the longest recorded absence of breathe being 17 minutes in a living person, breathing is fundamental to connecting our elements and our bodies in flows of energy. We learnt how to make noises congruent with the expulsion of air according to the organs we were targeting; a mixture of shhh, choo, haaaa, ugggh noises being generated throughout the weekend. 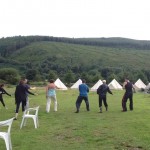 We mediated with smiles and light. Some of us fell asleep during these practices and the slight telltale snore might escape from the person to your right or your left. We practiced strange dances, repetitive movements like ballerinas on go-slow, using our arms and hands to carve emotions through the air, drawing energies from the sky or rooting our bodies to the earth.

We perfected our grounding stance, then aligned our spines while stretched across two chairs. An interloper might have imagined we were, well I’m actually not sure what they might think, but it would have looked strange as volunteers pushed up their hips, only to be straddled by a trainer and pushed back down again. The net effect of this tussle was the strengthening of lumber muscles and so when we assumed the grounded position again once back on two legs, it felt much stronger after this exercise. Yes, this paragraph is full of involuntary innuendoes and we did giggle a bit. 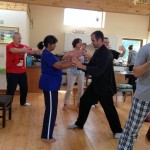 Actually we giggled a lot. Some of the noises made us laugh out loud. Some of the practices produced stifled giggles that crescendoed into belly laughs. Sometimes we just laughed for no reason. Other times, we were silent but for our breathing.  Into those silences our Mayo Monk might play a single chime produced on his bowl and gong. It rang through our spines deep into our bodies and we followed the energy flows with our minds.

There were breaks and these were filled with talking, non-stop talking, like school children released by the bell. We grouped and regrouped and made new friends and found old ones. We formed huddles but by the next break, these dissolved into new huddles. We moved by osmosis throughout the group, blending and mixing without overlap or isolation. 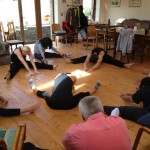 In the debrief, again we were asked if we had achieved what we had desired. To a person, we all said yes. We all also said what made our weekend was our fellow travellers. No two people were alike, yet we had all coalesced into a tight group by the end of the two days. Some were quiet, some noisy, some tee total, some managed to stay in the Glenmalure pub until 3am on the Saturday night, some were early risers, some were not (see previous group), some snored, some talked late into the night, some talked early in the morning, their voices running through the other tents like a wake-up call. And then there was the herd of young horses which stampeded their way up to the tents in a ground breaking fury at five am in the morning, only to stop short and trot away, their mischief done!

I had my retreat cheery popped in Glenmalure and I have to say it exceeded all expectations. To the organisers Karen, Paul and Lisa well done, to the glamping doyen Maria top marks and to our lovely Mayo Monk, Colin, thank you for an outstanding experience. 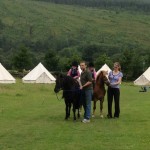 Carol, Barry and family were not on the retreat but they popped in to say hello. It was that kind of a weekend!

Posted in Musings on my time on this planet ..., Uncategorized and tagged alchemy, glamping, glenmalure, meditation, qigong, retreats.