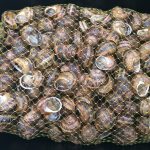 Eva Milka came to Ireland by accident in the middle of a tourism degree in her native Poland when her then boyfriend suggested she join him in a job interview for the newly opened Lyrath hotel in Kilkenny.  She got the job while he did not, and so she cast aside her degree to work in Ireland much to her parent’s disappointment.

‘It just felt it was the right thing to do,’ says Eva. ‘ We moved over and settled into Ireland but the one delicacy we could not find was escargot snails – so we set up a mini breeding farm using plastic containers in our one bedroom apartment in Kilkenny.’

The love of snails only grew and now Eva is looking for other pioneering spirits to join her in the growing snail business.

‘Four years ago my partner and I decided to look at farming snails professionally,’ says Eva. ‘We took one year to conduct research and development, the second to set up our infrastructure and for the last two years we have streamlined snail production, found distributors and are now looking at value added products through a processing plant in Greece.’

‘There are no facilities to do it here in Ireland,’ she explains. ‘In fact, we had to learn everything from scratch in Ireland as nobody had done it successfully before.’

Eva and her partner Eoin are now on a mission to help other would-be farmers setup their own snail farms. ‘We have done the hard work and can now provide a step by step guide for other people wishing to enter this industry,’ she says.

Diversification in farming is the way forward. A recent Teagas report from 2016 offers stark reading when it comes to viable farming incomes. There are 130,000 registered farmers of which 50,000 do not even make €8,000 a year.

‘An acre will raise a cow,’ says Eva. ‘But that same acre can raise 10 tonnes of snails at a market value of approximately €40,000. It is not a difficult sell.’

‘We have learnt the hard way what it takes to produce a quality Irish snail product,’ says Eva. ‘Even down to selecting the best snail species; Helix Aspersa Muller. We have tried other variants including the closely related Helix Aspersa Maxima but it was not as successful.’

Eva stresses that they had to learn how best to suit the snail to the Irish climate. ‘In Poland and France they have four defined seasons with plenty of warm nights – essential for the nocturnal animals. Here in Ireland we tend to oscillate between Spring and Autumn so it was harder to plan the maturation cycle at first.’

There are four main stages to snail production. The first is the mating and production of eggs. Start-up snail farmers can skip this bit in the first year if they prefer, making their baptism into snail farming easier and go directly to the purchase of the baby snails.

The snails mate in a warm chamber before being encouraged to lay their eggs through the introduction of soil. Each snail may lay up to 150 eggs. These are gathered manually using a plastic spoon and placed in the incubation chamber. This is a small area where the stacked boxes of snails are kept at 20 C where they hatch after 15 days.

At stage three the tiny snails are placed in a poly tunnel to fatten. They will stay here for eight weeks.

Stage four is where the snails are moved into the field. Just one acre can accommodate 1.2 million snails and produce 10 tonnes of snail meat. The acre is laid out with tilted wooden supports, like pallets propped up, which both protect the snails from adverse weather and allow dry food to be place on top for when they come up to feed at night.

Netting covers the entire area and galvanised sheets primed with an electric fence on the border prevent the snails from escaping and birds and rats from entering.

Harvesting is done by hand and is, Eva admits, labour intensive. The snails are then purged, netted and exported. Breeding adults will be selected from the acre and placed in a hibernation room where they will sleep over winter until they woken in December to mate, beginning the cycle once more.

Eva has learnt the hard way in the past four years how to successfully farm snails and then to finding distribution to the untapped and huge demand on the continent. She wants to teach other farmers on small holdings to do the same and runs regular workshops to teach people everything she had learnt. These are run three times a month, cost €250 and last from 10am until 4pm. People attending the workshops are also encouraged to come and help as interns at critical times of the production.

She explains that the initial investment costs for 10tons production is approximately €24,000, of which baby snails account for €7,500. Year two these costs are eliminated as the farmer will now have their own breeding snails (approximately 25% of stock). Annual costs include feed, electricity, labour and maintenance and can be in the region of €17,000.

Baby snails cost 11 cent per thousand while mature breeding adults cost between 10 and15 cent per animal. Between 25 and 30 thousand breeders are required to populate an acre.

The big distributors of snails on the continent are not interested in individual farms – they want to buy in bulk and this is where Eva is driving her business model – to create a Central Producer Hub of indigenous Irish snail farmers. She plans to keep Garryhill where the first farm is located as a research and development centre and move production to a joint venture in Kildare. She is also exploring the added value side of things creating products for wholesale and eventually direct to the public.

Snail meat is very versatile, high in protein, low in fat and yet has high reserves of calcium and iron. It also has a very low carbon footprint making it a very attractive food source for the future.

‘Ten years ago no body ate avocados in Ireland,’ says Eva. ‘And now they are ubiquitous.  Over the past four years we have learnt everything there is to know about how to farm snails in Ireland. It is a very suitable climate (just look at your back garden, it is full of snails), there is access to land, clean water, and good soils. In addition, we are a farming country with an excellent international reputation for food. So, if the rest of the world can do it, we can do it as well. And we can do it better.’ 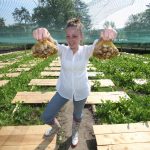