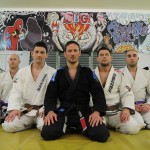 Never since the glory days of gladiators has there been so much interest in hand-to-hand combat. It hasn’t happened overnight, it is rare that an overnight sensation actually happens overnight, but Mixed Martial Arts (MMA) has passed the point of being a niche sport and is now officially the fastest growing sport on the planet.  21 years ago the first ever UFC (Ultimate Fighting Championship) fight was staged in Denver, US, on a limited pay-as-you-view channel.  The beauty of the new sport was its diversity, linking as it does the different disciplines of martial arts into a hotchpotch of a sport – a fascinating, visceral, ambitious, primeval spectacle.  Taking the highly structured moves from each martial art and then putting them together created an explosive combination. In the first televised competition in 1993, in which there 8 fighters, the expression was coined – two men enter, one man leaves – to hype up the fights. But as local MMA coach and legend John Kavanagh adds. ‘Followed by the other man leaving shortly afterwards.’ And that is why this sport is different.  Being a young sport it was humorous, cross culture, highly addictive and making up the rules as it went.

First a disclaimer. In the 21 years of UFC being played and fought, there have been two broken legs. Period. While comparisons are odious, it is worth noting despite the ferocity of the strikes, this is a relatively safe sport, as contact sports go. At professional level the risks are higher, as with all sports, but the danger is in direct inverse proportion to the visual excitement. It is, again as Kavanagh points out, a sport where defence is as important, if not more, than attack.

Kavanagh, owner of one of the fastest growing MMA gyms in Ireland and coach to Irish UFC hero Conor McGregor, didn’t watch the original competition. He had been involved in Karate from the age of four, experimented with different forms of martial arts and was intending heading off to college to become a teacher. He had signed up for mechanical engineering in Bolton Street and was in his first year when an act of unintentional larceny changed the course of his life.  In his local video rental store he took out a VHS video of that first UFC competition. In the course of the competition, the triumphant winner emerges as a skinny Brazilian called Royce Gracie. Using Brazilian Jujitsu, (BJJ) this insignificant looking man emerged victorious against the plethora of buff Americans and even sumo wrestlers.  In a single sitting, Kavanagh was hooked and the video never returned.

Throughout his four years in college, Kavanagh became obsessed with the sport. He and his friends started experimenting, throwing armlocks into traditional set pieces. There was no UFC in Ireland. There was no UFC in the UK. There was no UFC in Europe. It took him almost six years to learn by trial and error what his professional trainers can impart after six months now. On that journey Kavanagh earned his electrical engineer degree before going on to open his first gym. He worked security at night to pay the bills and during the day he worked with young fighters. His first inclination had been to teach, and if coaching had not worked out, then he would have become a maths teacher, which was his mother’s preferred choice.

‘I could not in all honesty turn my back on MMA,’ says Kavanagh. ‘Even though I knew my obsession and dream was similar to being an artist, or a rockstar with the same levels of job security, I had to pursue it. My fallback position was that I had my degree. I could do a hDip and teach if this did not work out.’

Kavanagh got his black belt in Brazilian Jujitsu and fought and won MMA fights at Irish and British levels. He is a believer in the coach having the experience of his subject. ‘I wouldn’t like to be the dry-land swimming coach,’ he says.  From the beginning, he was always the teacher and today fosters a spirit of comraderie in his gym. ‘Martial arts is as much about discipline as fighting,’ he says. ‘The young people learn to fight in a very structured way. There is respect and discipline in the gym. Sometimes the public gets confused with ‘trash talking’ before a professional fight. That is the entertainment side of things and bears little resemblance to actual sport.’

Just last weekend, Kavanagh returned from South Africa where it was almost a case of deja vu. His own professional career took off when he began competing abroad and thirteen years ago he made his way to Johannesburg to fight. It was a successful trip earning him a title, prizemoney and a friend in the form of Matt Thorton.  Thorton was to be very influential in Kavanagh’s fighting and business, fostering as he does the principle of ‘aliveness’ in the gym which also encourages athletes and non-athletes to train side by side. Thirteen years ago Kavanagh’s professional career was founded and he went onto hold various titles including a gold in the European Brazilian Jujitsu Championship in 2006; indeed he was the first Irishman to attain a black belt in BJJ as well as the first Irish MMA sportsman to compete in the Cage.

His friendship with Thorton continues today with Kavangh earning a glowing recommendation from the Oregon based innovator. Thorton says of Kavanagh:  “Anyone that has rolled with John knows that his own personal BJJ game is phenomenal. He is a world-class BJJ athlete, and his skill at the fundamentals of each position in BJJ, are top notch. In the dozen years or so I have had to Coach BJJ athletes I have yet to work with anyone that matched John’s level of technical finesse.”

Kavanagh travelled last weekend to Capetown where he cornered for one of his professional fighters Peter Queally. At 29 years of age, Queally is at his fittest. A dedicated athlete, Queally had been invited to take part in the ESC championship, which is the foremost MMA organisation in Africa. Queally was the first non-African to take part in this prestigious league. Appearing in front of a huge crowd and an undefeated opponent, the odds were not good. When asked who won, a nonchalant Kavanagh replied: ‘Peter of course.’  History was repeating itself in a good way. For the rest of the weekend, Queally was feted as a hero and he will most definitely be back. While the prizemoney may have been nominal, Queally is now well on his way to success and in time, Kavanagh hopes, an invitation to join the UFC.

Kavanagh’s boy wonder and now seasoned UFC fighter, Conor McGregor, wandered through the doors of his gym a callow of youth of seventeen.  Although here Kavanagh pauses. ‘Actually Conor never moves without purpose. He didn’t wander in. He was young, loud, obnoxious and funny. And he worked bloody hard.’

When asked what differentiates Conor from other potential fighters, Kavanagh puts his finger on the point directly.  ‘Conor loves this sport. Other young men or women may join the gym keen as mustard but months and years of training can takes its toll. But Conor has never faltered. He has never seen training as a job or something to be done. He thrives on passion. He is a once off, a genius. He is the only other person with a key to my gym and sometimes he is there at 2am in the morning. That takes some passion; day after day passion.’

Other attributes which mark McGregor as different from his peers is his competitiveness – he’d want to win at tiddlewinks according to Kavanagh. He points to Conor’s cleverness, his savvy approach and his keen interest in marketing his own brand. Kavanagh does not mention the hair but it is an implicit part of the package.

But the beauty of Kavanagh is that he does not focus on one fighter. A true coach, his attention travels across a wide swathe of fighters and athletes. He is also ferocious in his desire to see the young fighters continue in their education. ‘It is not mutually exclusive,’ says Kavanagh. ‘Peter is a teacher, Cathal (Pendred) has a degree in analytic science and I have a degree in electrical engineering. I keep on telling the young kids they need something to fall back on.

‘There is nothing wrong in having a dream. Or hoping that Simon Cowell will pick you out of the casting audition, but everyone needs a fall back plan. For me, it is important the kids finish their education and it is something they can certainly balance.’

Kavangh recently opened a new gym, Straight Blast Gym, on the Naas road. His membership has jumped from 100 clients to more than 400 in the past six months. He acknowledges the fortunate combination of the success of his professional fighters and the new interest in the sport. He is finally making money from this business but it has been a long, hard slog. ‘Over the years I have had many young fighters sleeping on my coach,’ he says. With the forebearance of a tolerant fiancé, he has moved bunk beds into the spare room to continue this tradition. However, for every wannabe fighter, there are 99 people who just want to get fit or try a new sport.

‘I get messages from people who say training in MMA has literally changed their lives,’ says Kavanagh. ‘They get fit, they get confidence and they also find a supportive circle of friends.’ The Gym is more of a club with social activities on a regular basis – with an emphasis on family friendly fun. ‘More women are joining too,’ says Kavanagh. ‘For all new members we organise a private session so that people know what to expect. It can be daunting to try a new sport and we want to make it as painless as possible.’ With that in mind, Kavanagh is constantly challenging himself. Recently he togged out in a rugby club to try it out. He too felt the nerves that come with starting something new.

Kavanagh, despite his quiet spoken manner is passionate about more than just his fighters. He believes all kids should get an education – and often quotes Cathal’s degree in Analytical Science from DCU while training professionally. And he believes that kids (actually everyone) should do sport, it doesn’t matter what as long as they do it. ‘Some of the young seven year olds who start training here are puffed after ten minutes,’ says Kavanagh. ‘What is that all about? Kids need to get off their phones and into sport. Otherwise we are going to end up an obese nation.’

MMA is a funny sport. The original rules of engagement are predicated on respect, discipline and control. But the resulting mix in the ring can be frighteningly violent, leading journalists to sometimes question the sport and even link it, in one recent, well-documented interview, to bar room brawls. This is a quixotic jump to make, as front row rugby players are rarely asked if their scrum and ruck skills contribute to fracases in Temple Bar. And as if to further point up the absurdity of comparisons, Pendred made front page headlines in his native Clare when he rescued a baby dolphin at Doonbeg with his girlfriend before releasing it back into the sea. Not the obvious activity expected of a professional fighter.

And as for the Irish in UFC, Kavanagh likes to quote his prodigy McGregor. ‘We are not taking part in UFC, we are taking over.’