The young girl who has a baby to ‘get ’a house is not your enemy. Would you wish that lifestyle choice on your sister, daughter, or friend?

The chap doing the nixers and claiming the dole is not your enemy.

So if your neighbour is on the dole, if the girl next door has babies to earn a house, if the chap who fixes your washing machine demands cash because he is on the dole…he is not your enemy.

The enemy is the lazy agent of government which refuses to make the welfare state more equitable. The enemy is the process that applies a slap-dash approach and ties up worthy recipients into a mire of red tape. The enemy is the over paid senior manager who runs a department in the same way it was run before because that is how it has always been done.

Why does seniority of tenure demand a large salary without expectation of greater performance? Why don’t we find entrepreneurs within government and institutions of state? Are they choked off by inertia, by ‘more than my job’s worth’, by sheer intransigence of circumstance, of history, of a sickening series of accumulations that together create an amorphous mass that cannot be shifted.

I am very tired of government and the people who are supposed to be in charge ducking out of responsibility for tackling issues. Instead they prefer to set the people at the bottom against each other, dividing and conquering, kept busy so that the injustice up the ladder is not seen.

Throw them bones so they tear each other apart. There was a report in all the major news outlets in January. It said that the people most affected by the new universal charges and levies are the middle classes, the squeezed middle classes. Those in receipt of social payments were said to be largely insulated from the rising costs. This was the headline in news reports and in the broadsheets, as well of course in the tabloids. It took a few days but then some bright spark questioned the source of this report. There was none. No source. No survey.

Then at the start of February we had the Magda scandal of the polish woman who was supposedly here as an economic tourist, living off the dole and laughing at the Irish people. The report was utterly wrong and so far from the original polish translation, but it not only ran in a broadsheet but had several senators and councilors roundly criticising her – the same senators and councilors who have access to large sums in expenses.

And don’t get me started on the laundry expenses kept by TDs in excess of €3000 per year. Are politicians meant to be prettier than the rest of us?

I refuse to look at the man next door and see him as my enemy.

There are many abuses to the social welfare system, not least that the self employed cannot access it. The self employed person by their very nature tends to be a self starter and wants to work for themselves or create larger companies. But sometimes the self employed need help too. I may be very good at my job. I have years of experience but that does not guarantee my success nor an increase in salary each year. Last year my company failed and I was unable to get any help. Instead I was visited by bailiffs. I still cannot get any help – and now is when I need it. I have no intention of remaining on welfare but I need it now and I cannot access it. I can only strive to re create my business. This is wrong.

Welfare should be administered on need. It should be compassionate. It should also be a right not a privilege. But it needs to be fair. If there are inbalances then these need to be fixed.

But why are the rules so hard to change, to fix, or to amend? I do not have access to the salaries and CVs of those working in management but I am sure they are high flyers, high earners and high achievers. Where there are inbalances, can not a critical mind re evaluate how they should work. Checks and balances. Why are they so undone?

My heart also stops when I hear the latest news from welfare that the department is going after the welfare dodgers, the abusers, the parasites in society. Why is it that a man in receipt of a lowly figure on welfare may be considered a parasite, while a politician in receipt of a laundry expense (just to pick one frivolous example) is entitled to look pretty?

Fix the system from the top. Look at Eamonn Maloney, Labour TD and the only politician who refuses to take expenses. He is not on a crusade; he believes his salary is sufficient. I am not saying that expenses are the work of the devil, but please let us count them the same way we count for the people on the dole, the self employed with no safety net, the old and those on the breadline.

The man next door is not your enemy. We are not in Orwellian country now where pig cannot be told from human. Look up people of Ireland to fix our country. Those in power, in salaries, in positions of authority have to earn our respect. They have to earn their salaries and positions in society.

Look up People of Ireland. 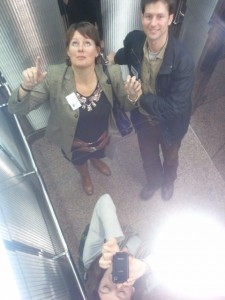