The Irish Tricolour, with its distinctive stripes of Green, White and Orange, is often viewed as a militant flag, a direct contrast and challenge to the British Union Jack and owned solely by one tradition in Ireland – the nationalist Catholic community. In fact, its origins could not be further from the truth and there is currently a movement to rehabilitate its image and indeed to encourage its widespread use in the same way that Americans, of whatever ethnicity, fly their national flag in backyards across the States. 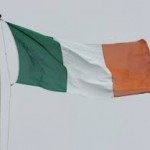 The Irish Tricolour was first flown in Waterford by Thomas Francis Meagher on March 7, 1848, at the Wolfe Tone Confederate Club at 33 The Mall. This was also of significance as Wolfe Tone a century before had fired up a movement that said: ‘Protestant, Catholic and Dissenter all unite under the common name of United Irishman.’  Meagher had just returned from France and wanted to realise a vision of a New Ireland from the wreck of the old sectarian Ireland. The band of white in the flag was the symbol of peace to join Irish Catholic with Irish Protestant and to forge a new unity and brotherhood between the two sides in a country that had been desecrated by the Great Famine.

Meagher went on to take part in the Young Ireland Famine Rebellion and subsequently sentenced to death for treason. This judgement was parleyed by Queen Victoria into deportation to Tasmania from which he escaped and moved to America. There Meagher continued to make a difference and this time joined the Union in the American Civil War. He raised a full company to fight with the 69th Infantry Regiment and went to head up the Irish Brigade. As a result of his involvement, the 69th Regiment became known as the Fighting 69ners. Following the war he was appointed Governor of Montana where he was institutional in bringing that territory towards statehood – the grant of which only happened twenty years after his death.  He is commemorated by statutes both in his native Waterford and in Helena, state capital of Montana.

A great orator, when he brought the flag to Ireland in 1848 he said:

…I trust that the old country will not refuse this symbol of a new life from one of her youngest children. I need not explain its meaning. The quick and passionate intellect of the generation now springing into arms will catch it at a glance. The white in the centre signifies a lasting truce between the “orange” and the “green” and I trust that beneath its folds, the hands of the Irish Protestant and the Irish Catholic may be clasped in generous and heroic brotherhood…”

Six years ago visionary local historian James Doherty from Waterford recognised the significant of the Tricolour, its history and the links with the 69th Infantry Regiment in New York. The 1848 Tricolour Celebration Committee was established that reached out to the 69th Infantry Regiment which resulted in a delegation arriving in Waterford to cement the connections. Every year since, a delegation arrives and Meagher, the Tricolour and the 69ners are celebrated. This year, Waterford went one step further and on Thursday March 12 renamed the river Suir bridge the Thomas Francis Meagher Bridge. The river Suir bridge was completed in 2009, is part of the N25 Waterford bypass and the longest single-span bridge in the Republic . 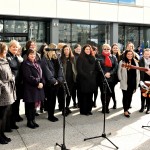 I was privileged to be part of the Island of Ireland Peace choir (formerly the Waterford Omagh Peace Choir) that sang at the Gala Dinner and subsequently at a formal military ceremony attended by full military honours and ambassadors, including this year Kevin Vickers, the Canadian Ambassador to Ireland. You may recall Kevin as he was the sergeant at arms that single handed stopped the lone terrorist attack on the Canadian Parliament last year.  Standing at well over six feet tall, Kevin commended the choir following its performance during the dinner. Our rendition of Oh Danny Boy had moved him to tears. The following day he joined in our singing, becoming an honorary member of the choir. 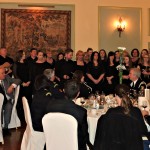 Colonel Jim Tierney spoke at the dinner. He spoke in Gaelic, translating it afterwards into English for the non-Gaelic speakers and into English for the Gaelic speakers! He spoke about the impact of political correctness on the history of the Regiment. For much of the last quarter of the last century, the emphasis on diversity did not allow for the celebration of ethnicity. It was not until the Regiment got an invitation to come to Waterford five years ago that the links were refreshed and the Regiment had an emotional home-coming to Waterford. He and his men fully embraced the connection and wished to see it continue and grow year on year. He also spoke of the role of Irishmen in the American Civil War. Recent historians are now estimating that more Irishmen fought in the American Civil War than in World War One, with Meagher being an inspired leader, seeking justice for the repressed.

This talk was given in the Granville Hotel, originally the birthplace of Meagher and was a fitting location to lead such a tribute. And as for the breakfast – I am sure that Meagher would have been impressed with that too. A choir can only sing on its stomach and we sang like canaries after that!

One final interesting fact: the Tricolour when first flown outside 33 the Mall was raised back to front with the orange band next to the flagpole. The 1848 Tricolour committee spoke with the Irish Department of Defence for permission to re-enact this mistake but permission was refused. For those of you in the military you will already know the reason for refusal – a national flag flown upside down or the wrong way around is an international symbol of disaster or distress. And we were far from that in Waterford at the weekend.