First printed in the Irish Independent on Feb 6, 2017

The last time I had a special relationship with another person we did, I confess, hold hands. It is what special friends do to show their affection and is moreover tolerated in public, even by puritanical bystanders.I recall vividly that the hands were not small; they were warm and friendly, closing over my fingers in a comfortable fashion.

And that is why I watched with some small horror the scenes between Theresa May and Donald Trump, arguably the two great leaders of the free and English-speaking world. It was a first press conference and their smiles were wide for each other, both giving the open-mouthed braying hahahas of leaders in debate. She, smiling coyly over at Mr Trump as she answered for both, dismissing the gaps that lay between them and focusing on the ties that bind. 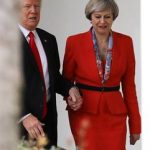 Mr Trump on his part swirled his flat-topped Barnet Fair like a small boy in a shop. Looking this way and that and waiting to be offered his choice of confectionery.

Smile, smile, smile – the hallmarks of a special relationship. But it did not end there. Later as they walked, another visual cue of solidarity, his little hand sought out hers. Captured by an observant videographer, his fingers crawled over hers and in a sweet demonstration of the special relationship enjoyed by the two countries, by the two leaders, their fingers entwined.

But wait – that is not the handholding required between nations. I have never seen two world leaders cosy up into a handholding, ever. What were they thinking?

As Mrs May went home, she discovered more gaps between them, the ones she had tried to cover up in the press conference. The subsequent travel bans on citizens from Muslim-majority countries. Mr Trump had not deemed it important to tell Mrs May this little surprise was up his sleeve. She went home and straight into a storm of criticism from the opposition benches. Had she known Mr Trump was about to sign those executive orders? Was the handholding more of a walk of shame?

And what strange accident of fate decided that the two leaders of the English-speaking world had verbs as their family names? What is the universe playing at there?

Later, at the start of Black History Month, Mr Trump, with notes in front of him, spoke of Frederick Douglass, the former slave and abolitionist leader. He said: “Douglass is an example of somebody who’s done an amazing job and is being recognised more and more, I notice.”

People scratched their heads at this. Did he not know who Mr Douglass was? Later his press officer Sean Spicer added clarity to the remarks. Yes, he said, what the president meant was that more and more recognition is being given to Mr Douglass.

People scratched their heads even more at this explanation which offered no new insight. It was up to the descendants of Frederick Douglass to post a statement of 15 achievements in the ‘Huffington Post’. We are not sure if Mr Trump read them, but on balance I think we can safely say not.

Which brings me to the novel ‘Transatlantic’ by Irishman Colum McCann. This fantastical book traces in part the journey by Mr Douglass when visiting Ireland in 1845. For Mr Trump’s benefit, let me quickly summarise the events. Mr Douglass had escaped slavery in the south and moved into Maine, where slavery was abolished. There he penned a book on his life which made him a potential target for bounty hunters wishing to return him to his ‘owner’. Aided by the abolitionists, Mr Douglass left for a two-year lecture tour of Ireland and the UK.

Mr Douglass acknowledged that speaking in Europe would greatly increase the chances of his being heard in his native America. A self-taught man, Mr Douglass was charismatic and a powerful speaker. While on his travels around Ireland he met Daniel O’Connell. Mr McCann writes of a meeting of the two, now with Mr Douglass being called the Black O’Connell in Ireland.

Mr McCann writes: “Two days later, in Conciliation Hall, O’Connell brought him [Douglass] on stage and he thrust Douglass’s hand in the air: Here, he said, the Black O’Connell! Douglass watched the hats go up the rafters.”

And later, towards the end of that chapter: “O’Connell walked on stage and raised his [Douglass’s] hand in the air once more. The Black O’Connell he said again.”

And that, ladies and gentlemen, is how world leaders, arguably the main leaders in the English- speaking world, should hold hands. Not in the sweet touching of fingers almost hidden from view but thrust into the air, on a platform, with a message to give. The cause of humanity is one the world over.

Unless your surname is a verb that can alternatively be happily employed in a whist drive or used onomatopoeically as slang for flatulence – and then anything goes.