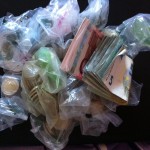 Yesterday I handed over €650 to The Insolvency Service of Ireland in order to go bankrupt. This is what the fee looks like: €650 in coins and some fivers and tens.

It could be worse. In recent weeks another client of the Irish Mortgage Holders Organisation (IMHO) handed over a cheque from Saint Vincent de Paul for the same purpose. Going bankrupt is not a pleasant action. It is not an easy action. For most people it is the end of the road. The bankrupt may claim it is a new beginning, but it is hard to form a new beginning when you don’t have anything or a job or an income to start over.

Bankruptcy is the end of the road. It is the elimination of debt. That is to be welcomed. But it should also be remembered that unlike the high rollers who take this route, who have pensions and salaries and multiple homes, there are many people like myself who have to scrape together the fee, who no longer own a home and who have no means of income except social welfare.

I welcome becoming a bankrupt, to calling a halt on my debt. However, it is not something that I would have aspired to as a teenager. I didn’t day dream that one day I could be a bankrupt and start all over again. It is a necessary evil.

In about ten days I should be in the High Court finding out if I am to be accepted as a bankrupt. I have waited a long time for this but it is one life event that I shall not be celebrating. I am pensive as I journey in this direction, hope intact but in short supply, eroded as it has been by the daily privations of encroaching debt. Even as I hope to undo my shackles, I am not sure what will replace them.

It is good to be free, but freedom like health, is better enjoyed with money than without.