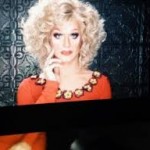 What has happened with our country? We are going through one of the darkest periods of our modern history, with more people queuing up to see Garth Brooks than demonstrating against our governmental self-inflicted poverty. And when it comes to showing what is happening we are reliant on the outsiders to show the truth, even if we have to view our society through a fake wig and eye lashes. When did the truth become more true when delivered by a man dressed as woman. And please do not get me wrong, I have nothing against a man dressed as a woman, maybe not my man, but I fully support Panti’s dress code, gender code, wig code., but doesn’t it say something when the so called ‘outsiders’ of a society are leading the truth charge?

In the same way, feminist, activist, erotica writer Aoife Brennan is leading a little charge all of her own. I interviewed her last year about her first book of erotica and it was all about ‘real world sex’ but the second two books developed into full scale feminism and her trilogy has become thinking women’s erotica. Her erotica is the genre that dares to speak its name. Her books, which touch on financially inspired suicide, the banks, social media, women’s choices, austerity, legal issues, and much more, including graphic sex, were quoted on Twitter recently as being the lynchpin of Enda’s comments. So the Irish prime minster is now relying on a feminist erotic book to explain what is going wrong with the country.

When the outsiders of society point to harsh truths, then it is time to listen … 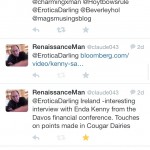