In a series of reader submissions to the Irish Times Amateur Travel Writer competition, we meet Jillian Godsil, who finds herself in the midst of adventure on an equestrian safari 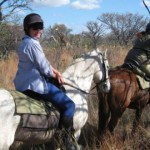 Sometimes, oftentimes, the things you really should do never feature on the average bucket list. For example, it would take a random ideas generator to put hippos and swimming together. The category of ‘swimming with’ usually includes non-violent animals such as dolphins or whales, and maybe sharks but that typically includes a cage or two.

I was on an equestrian safari in South Africa in the Waterberg region when I met my hippos. We had done all sorts of activities on horseback; witnessed giraffes up close, viewed any number of gazelle take fancy and flight, watched pronking sprinkbok with our mouths open (and our mounts firmly on all four legs) and had even ridden in a cloud of wildebeest as they whirled in formation across a dusty plain. We once rode softly past a white rhino and her calf, the quieter of the African rhinos, and she barely looked at the horses and riders as we tiptoed past, trying to balance cameras and click pictures without attracting her attention.

On our last day, we went deep in the countryside on horses that were as dependable as the Bank of England, back in the day when banks could be depended upon. We stopped at a waterhole. My ride decided he needed a little swim himself and began pawing the ground. I jumped off just in time before he rolled in the water. One of my companions said that many horseriders died when they failed to dismount and were drowned under the horse. I’m not sure it was true especially when she continued to tell me about a couple crushed when a male elephant decided to mate with their tiny rental car. Safari myths when told at home are easily scotched; when told in the veld it quite another matter. I gulped my fear, remounted and we carried on.

When we reached the end of the game fence our guide turned back and informed us the unseasonal rains had resulted in higher than normal water levels. We needed to part-walk, part-swim to gain high ground and continue our trek. I looked around at the other members of the group expecting resistance but everyone was simply tying perishable items around their necks. I followed suit, fastening my camera under my chin strap. I must have gone white in fear for an octogenarian lady in our group patted my arm. ‘You’ll be fine.’ She said. ‘Follow me.’

One by one the front runners plunged into the waters and struck out for the far bank. The water was first still and green, then rushed and rippled as rider after rider pushed forward. In all too short a time my friend set off, but not before giving me a kindly glance. I didn’t wait around and kicked on my horse. Together we entered the water and for a period I could not tell if he was swimming or walking through the depths. I leaned forward, trying to take my weight out of the saddle as we moved slowly through the water. It seemed like an eternity but soon I could sense his hooves getting traction on the ground and we were clambering up the muddy bank the far side. I did not have time to reflect on our achievement as the front riders were now cantering along in hock-high water. My mount bucked and took off too. I clung for dear life to the saddle as water and green watery ferns slapped my face while all the time the basking hippos barked gently, only a few feet to our left. I had been swimming with hippos.