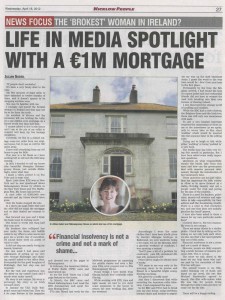 It’s been a very funny start to the year. My five minutes of fame seem to have extended to twelve months of fame, and it doesn’t appear to be stopping anytime soon. You may be familiar with me. I joking call myself the ‘brokest woman in Ireland’ and that may not be so far from the truth. An accident of divorce and the recession left me holding the baby, or rather a one million euro mortgage on a house worth less than half that. I cannot afford to live in the house and I am at the pin of my collar to support and keep my two teenage daughters. Currently, we live in a rented cottage some ten miles from our original house, but it may as well be 100 miles away. I have sold everything from my old house to pay for bills. This year is a bit bleak as I have nothing left to sell and the bills keep coming.

In 2011 I decided to sell my house (the beautiful Georgian Raheengraney House, just outside Shillelagh), come what may. I made a video, posted it on You Tube and it went viral. Mark Little from RTE was in New York and he was questioned about Raheengraney House by editors in the New York Times and The Huffington Post. My house had arrived. A cash offer of €500,000 was secured and my house should have gone. Only the banks stopped the sale. In a short one page letter they said the offer did not equal the mortgage and so they denied me consent to sell.

Fast forward one year and I think the bank must be kicking itself. The house is worth less than half that sum now. My business also collapsed last year under the strain and bailiffs called to my office to seize assets and gave me a week’s stay of execution. Of course there were no assets of value to take. It did not stop me nearly losing my reason, however. For one week I had plans and nightmares of setting up my very own ‘Occupy Shillelagh’ and chaining myself naked to the office door. Fortunately for the good burghers of Shillelagh, that last step was not required. But the visit and experience was the straw on my camel’s back and I nearly went under myself.

In January the UK Telegraph came and visited me. They ran a six page feature in the magazine and devoted two of the pages to Raheengraney. In February, the American National Public Radio (NPR) came and interviewed me. So too the Irish Times ran a half page feature on the house. In March, BBC came and filmed Raheengraney. Last week the RTE documentary unit spent two days filming there. TV3 also filmed last week for the Midweek programme on squeezing the middle classes and even a Belgian Film crew popped over to film Raheengraney House.

Funny things I have learnt from filming include don’t sunbathe while filming. While working with RTE, time and light meant we had to cut short some sequences in the house to return the next working day, after the weekend. Accordingly I wore the same clothes that I have been kindly given by Deirdre Minogue boutique in Rathwood, my own wardrobe being a bit ropey, but on the Monday, after a glorious weekend of sunshine, I was sporting a suntan! That’ll pose a bit of a problem for continuity:  pale Jill, suntanned Jill, pale Jill, suntanned Jill!

Other advice might be always carry a hanky. TV3 came to me very early in the morning, 8am to be precise and filmed in a beautiful bright sunny, freezing morning. Not good for a sniffy nose!

And then I discovered that while recording the American radio interview, I had misplaced the keys. So for BBC and TV3 I had to break into my own house, using crowbars, kitchen chairs and torches to negotiate my way up the dark basement stairs. I guess the word to the wise here would be – don’t lose your keys in the first place. Fortunately by the time the Belgians arrived, I had found the keys in a spare jacket and our continental friends did not have to witness the mad Irish breaking into their own houses. A blessing indeed.

I also discovered the strange world of nodding and noddies. While the BBC had a crew of seven, the Belgians three and the Irish two, there was still only one cameraman with each. To get a two headed interview required the cameraman to focus on me or the interviewer as we spoke, only to return later to film silent ‘noddies’ which would be inserted into the sequence later in the editing suite. Trying not to laugh or talk while either ‘nodding’ or being ‘nodded to’ is very hard.

The media haze has been very tiring this month in particular. But I have been asked some really important questions. Questions on what responsibility should the banks take from this mess and how can the government deal with massive personal debt, namely through the introduction of fair bankruptcy laws. These questions are not just mine, they are important for Irish society to allow us to move forward as a viable, thriving country and not a people under the cosh and paying for the sins of the reckless. There is a need for bankers, politicians, senior civil servants and regulators to take responsibility for their actions and the devastating results. There is a need to find resolution too, and one that does not unfairly penalise the ‘small’ person.

I have also been asked is there a reason for my own particular media haze? I believe there is. For two reasons: My story is not unique. There are many others in a similar pickle. I think that by talking and listening we not only help each other, we also can find a fair and equitable way out of this mess. Financial insolvency is not a crime and not a mark of shame. However, people are daily committing suicide because of massive personal debt. This is wrong. The more we talk about it, the more we can help those who can’t see past by the mountain of debt. This too will pass.

The second reason is my film. Called Running out of Road, and based on my novel, the one that Michael Fassbender agreed to launch, this film will explore what life was like for people living through the Celtic Crash and how we come out the far side.

There will be a happy ending.