The speed at which moral outrage can circle the world can be measured in mouse clicks. Six degrees of separation is all that divides us from Cecil the Lion; that and a few million tweets. For a story that barely grazed the pages of the Zimbabwean newspapers, it had generated an angry online mob complete with death threats within hours. It had swiftly mutated out of social media and mobilised into an on-the-ground band of protestors complete with placards and news cameras. It had even become the source of Jimmy Kimmel’s normally comic opening to his show.

The dentist is in hiding with US police checking out the death threats. There are calls for him to be extradited to Zimbabwe to face criminal charges. He won’t be looking at too many dental cavities for the next little while. His five seconds of fame with Cecil might have put him out of a job permanently.

This is not the first time Man versus the Twitter machine loses. In fact, the solitary human being is no match for the thousands, nay millions, of bullets from self-righteous online activists.   I am reminded of world war one when the machine gun emerged as the deadly killing machine. Even the terrifying cavalry was rendered vulnerable as a single machine gun could take the place of 80 rifles.  Like Twitter the early machine guns often overheated, requiring water or air cooling to stop them from jamming. It was not unheard of for machine gun operators to resort to urinating on an overheating gun in the midst of battle to keep the gun running smoothly. Yet another similarity with mass social media mobs.

It is also interesting to note that the most modern machine gun available at the start of world war one was the Maxim. The inventor, Hiram Maxim, offered his design to the British Army but the British High Command rejected it; officers even felt it to be an inappropriate form of warfare. Sadly for the British Army, the German government had no such qualms and inflicted severe carnage on the British troops as a result.

Twitter can certainly be called an inappropriate form of social discourse.  Like the early machine guns that grouped together for maximum results in impregnable points on high ground, the Twitter crowd gathers together on its high moral ground before launching its deadly attack.

At the end of the day, Twitter relies on its moral superiority for it power. It dispenses with legal rights, principals of fair trial and even the basic rights of an individual caught in the cross hairs. It is akin to a bearded Old Testament warrior claiming an eye for an eye. There is no due process, only moral outrage, and carnage, plenty of carnage.

It can be argued that Twitter is a power for democratising society; it can take down monoliths, behemoths and corporates. Yet, increasingly it seems to reserve its ultimate anger for individuals who break the code. Individuals who are hunted for days without letup, punctured and wounded and if the more extreme edge of the crowd had their way, killed in an even more barbaric manner than Cecil died.

I am against Cecil’s death but I would not see Twitter do the same to the dentist. One is a lion and one is a human being and two wrongs do not make a right.

For where does the outrage stop? First for a lion, then for a giraffe, then for a fox, then for a salmon, then for a fly?  And why not for a human being – can we not reserve some emotion for the thousands of human beings dying in terrible conditions as the world witnesses more displaced people on the move than at any other time in our history.

Twitter as a machine gun is deadly. Twitter as an advocate of change can be even more powerful. It is all about the target. 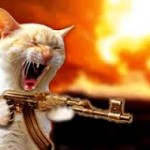