First published in the Irish Independent on 23 December, 2016 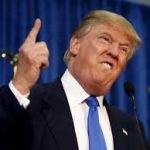 George Santayana, the Spanish philosopher, is credited with the sage observation that those who do not remember the past are condemned to repeat it. Sound advice, to which I would add a codicil – those who write the history dictate the repetition and in that case, are we actually repeating what happened, or inventing a past to repeat?

I have been boring my friends and anyone who cares to listen for the past five years or so that we are sliding into a new history that looks very much like the old one. I have said it on live radio, in live pubs and at live dinner party conversations. I am like a parrot at this stage.

Now I see it on Facebook, arguably the caretaker of trends, where people quote historic lessons and provide modern parallels. The rise of the Third Reich is no longer a chapter confined to a history book; it is now a series of videos on social media where people are tracing clear and obvious parallels between Hitler’s monster rallies and Donald Trump’s election rallies.

Where the Star of David may have isolated a minority ethnic group, now the hijab or even skin colour marks a huge ethnic community. Within the predominantly Caucasian America and Europe, the “otherness” of Muslims is outed.

It is a strange thing to out an entire community. Can they be outed where they are in the majority? Are the roles reversed? Today I saw a Muslim restaurant in London offering to feed for free any homeless people on Christmas Day. How many non-Muslim restaurants are doing the same? But that is a rational question and we are dealing with a rise of behaviour and attitudes that seems to directly mirror the rise of the Third Reich, and by its very nature is not based in logic or common sense, but in fear and desperation.

But how we read our history is a twin-headed beast, and not to be taken at face value.

Among the many videos I have watched on Trump, I saw a particularly insightful one by a fictitious news reporter, Jonathan Pie. Created by the comedian and actor Tom Walker, his character is a brash, fast-talking reporter who does all his piercing comedy parody just before going live – talking to an invisible producer about how he feels before he reports.

There are several Trump videos, but the most searing one was produced the week of Trump’s victory. Pie is positively foaming at the mouth when he rants at his producer. Of course Trump won, he says. Trump won because the liberals let us down. Pie rants that the right wing did its thing while the left looked smugly on. Anyone not expressing a liberal viewpoint was labelled in terms far more damning than any clumsy right-wing demagogue might muster.

Pie called it right. We, the liberals, forgot to make good arguments and relied on lazy labels.

I was never one to defend Katie Hopkins, but she also nailed it when she appeared on the ‘Late Late Show’. She had a series of Post-its with labels already transcribed. At the time, I was aghast at her comments, but replayed again in my head with the benefit of Pie’s observations, I see it differently.

I also felt uncomfortable when a student spoke up in the audience. Also a Trump supporter, he felt unable to celebrate while watching the count in college for fear of derision by his liberal friends. Shutting down debate leaves it to fester underground, and we have a new army of Trump supporters going loud and proud. And all we have is labels to throw at them.

Is several weeks long enough to be called history? Can I look back on the most high-profile election campaign ever and see the trend, this disturbing trend?

And will history be rewritten this time? One must remember that history is written by the victors. Post-World War I, Germany was blamed for the war and reparations demanded. Revisionists have clearly turned that notion on its head, but not in time to prevent the rise of the Third Reich.

And closer to home, we see constant revisionism in this State. Tina Noonan wrote a play called ‘The Prodger’. It tells the story of her uncle returning from World War I and how he fought demons on all sides. At a showing in Dalkey, south Dublin, Ronan McGreevy, author and World War I historian, interviewed her after the performance. He pointed out that some 400,000 Irish men fought in the first war, that it was still “the” army in the first war, that it had not become the “British” army until De Valera got his hands on the history books and airbrushed out an entire generation.

Everyone on this island would have known someone in the army. But not everyone would have known someone once it became the British army. This is how history is rewritten with the connivance of victors and the acceptance of the populace. ‘The Prodger’ was performed last month in Magilligan Prison in Derry. A long-term inmate said it was not a play about war, but about love between men serving together. Or serving time together.

Before the next history gets written, maybe we need to understand it first and debate it without labels. Or maybe we should just write about love instead.