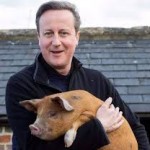 You’d have to have your head under a rock to miss #piggate. It signals the return to parliament and the end of the silly season. You’d almost be forgiven for thinking that the Tories had something to hide, some big scandal coming up along the way or perhaps they do. Perhaps this is the latest detraction story from their abysmal record on the refugee crisis. Cameron is up there with the most militant, entrenched Hungarian politician with his rhetoric and actions. ‘The swarms of migrants’ are not gaining traction in the UK. ‘Build higher fences’ and keep them out. Cameron is right on cue when he marshals the xenophobic excesses in ‘Great’ Britain into ‘Fortress’ Britain. He is guilty of pedalling the myth that multicultural societies do not work. They do. The proof is in London and he just must just try harder.

It is interesting in this day and age that the vile accusation is a matter of one man’s word against another. Neither had the benefit of a smart phone and camera to record the incident. I presume the publishers of Lord Ashcroft’s autobiography must have had a team of lawyers swarm all over the claims. And that by the way, My Cameron is the correct use of the verb swarm. It relates back to the subject and while wasps and lawyers are fair game, fleeing families risking death are not.

Of course, while smart phones did not exist in the last century, Twitter, Youtube and Instagram do today. In fact, we can dispense with the formalities of truth and imagine up any number of memes with Cameron and pigs. There is even a song out already with Mr Cameron ‘getting piggy with it’. The jokes are very funny, as long as you not the prime minister of the UK. Of course, it could be worse, he might have been the president of the greatest Western Super power inserting his phallus into a living receptacle. And then be grilled by Grand Jury as if it were a matter of state.

Which is an interesting point. Why should we be concerned about where the prime minister put his member while a student, especially as the object was dead? It is pretty gross and not really a vote getter but does it diminish his ability to lead his party? I would argue his actions regarding the refugees, or rather his lack of proper action, is way more damning.

Of course, this propensity to insert dicks into objects has been covered at length before. Back in the 1997, Fiona Giles, feminist and scholar approached dozens of well-known female artists, poets, authors and scholars and asked them what they would do if they woke and found themselves genitally altered. The resulting book ‘If you had a dick for a day’ provoked funny, witty and sometimes sad responses from the 50 or so women selected to reply. But I don’t recall anyone suggesting sticking their dick into things, just to see if it fitted (insert urban myths of vacuum cleaners stuck here). Although Germaine Greer bucked the trend and said if she was given a long enough one she might try having sex with herself.

Still, women tend not to engage in such merriment. In fact, I don’t seem to recall, ever, hearing about a sorority game that encouraged women to insert their bits into dead animals. I could be wrong of course. On the internet much strangeness can be found.

There were two interesting fallouts from this account. The first is the dark dystopian TV series Black Mirror by Charlie Brooker which featured the prime minister having carnal relations with a live pig. Mr Brooker has been interviewed all over the media, and indeed went live on Twitter as soon as the story broke, to confirm that he had no knowledge of the prime minister engaging in such an act. One wonders instead did Lord Ashcroft watch the series and did it jog his memory? Art influencing life in reverse perhaps?

Or the second, more cynical approach lies with a repeated story about US president Lyndon B Johnson in an early congressional campaign. Johnson apparently told one of his aides to spread the rumour that his opponent had sexual congress with pigs. His aide rebutted the idea, saying they could not spread out and out lies, to which Johnson replied: ‘Of course it ain’t true but I want the son of a bitch to deny it.’

And right on cue Mr Cameron has come out to say that he will not dignify the accusation with a denial. Which is a rose by any other name.