Ewan Hannay is ten years of age. A bright talkative child he meets your eyes confidently and answers questions in a direct manner. Last April his parents held a party for his First Communion and he collected rather a lot of money in presents. When asked just how much, he answers ‘loads’ while his mother Linda tells me it was almost €900.

Most children faced with such loot might consider buying the latest X Box or games console. Indeed Ewan tells me his friend Cormac used his money to buy a Samsung tablet. However, Ewan had different plans. His tells me his father is Scottish and that he is named after Ewan McGregor but Ewan had his eye on another Scottish celebrity – this time a Belted Galloway

Ewan lives next to his uncle’s farm in Moneyteigue, near Aughrim in county Wicklow. Ever since he could talk he has said he wants to be a farmer – as well as a construction worker, a driver of a lorry and a horse rider. Basically all the careers followed by his uncle Tom. As soon as Ewan could walk he has joined his Grandfather TJ and Tom every Saturday to help out on the farm. His jobs, when asked he says, are to feed the sheep, calves and lambs. He is also responsible for putting clean straw into the pens.

Ewan is the middle child of Richie and Linda Hannay. He has an older sister Evie, 12, and a younger Esme, 3. He is autistic but carries his condition in a bright outward inquisitive fashion. Since arriving he has quizzed me on other interview subjects and seems disappointed I have not really interviewed anyone famous.  He proceeds to question me about the animals resident in my home, what musical instruments I might have and if I could show him pictures of everything. Within a short while I am no longer sure who is the journalist in our conversation.

Originally Ewan had thought of buying hens with his communion money but Linda pooh-poohed the plan as ‘they will only encourage rats,’ says Ewan. He then looked at Jacob sheep as a possibility before turning to the Scottish breed. ‘Dad had me hounded to buy a Scottish animal,’ chuckles Ewan.

Finding a Belted Galloway is not straightforward as numbers are low and owners reluctant to sell the colourful animals. Pedigree belted Galloways are black rough haired animals with a distinctive white belt. A hill grazing animal their numbers are growing with almost a thousand across the island north and south. They are docile animals with high meat yields. They enjoy easy calving and many dairy farmers will use a Belted Galloway bull for their heifers which has produced mixed offspring. However, while the pedigree herds only have the white belt, mixed cattle may have white socks or tails and are not to be confused.

Originally Tom scoured Done Deal for a suitable animal, placing an alert to ensure whenever one came up for sale they would be the first to know. However, a chance encounter with a neighbour introduced them to Ronan Delaney, journalist with the Farmers Journal and secretary of the Belted Galloway Breeders association. A phone call ascertained that he had a number of heifers for sale and arrangement made for a road-trip to Dunshaughlin in County Meath in November of last year.

Ewan recounts the journey for me. He did not sleep a wink the night before. They travelled in the two seater Land Cruiser so his grandfather had to stay home. Along the way Tom tried to distract Ewan by suggesting a detour to Tayto Park or even to go on the beer but ten year old Ewan was not to be swayed. They reached Ronan’s farm and were invited to go and look at heifers in the field. A bull was there too but Ronan assured Ewan that he was safe too.

‘I had a choice of two heifers and I chose Abigail,’ he tells me. After the selection was made they went indoors to enjoy a cup of tea and do the paperwork.

Ronan was very happy to sell the heifer to Ewan. He explains: ‘I am building my own herd, I have twelve currently, but when I heard Ewan’s story I was delighted to sell him a heifer. Ewan is deadly. He asks a thousand questions a minute. He absolutely loves his heifer and when we got into the house for the cup of tea he had another thousand questions to ask my mother.’

Ronan gave Ewan luck money and he spent that on sweets on the way home. He could not wait to show Abigail to his grandfather.

Ewan then arranged for Abigail to go in calf with a handsome Scottish bull called Park Perseus. The calf is due at the end of the year. ‘She looks a little fat already,’ says Ewan. He let her out onto grass this weekend and now she won’t come to the gate when he calls. ‘I am not sure what to call the calf as yet,’ he says. ‘If it is a girl maybe Oreo because they look the Oreo biscuits. I love Oreos.’ 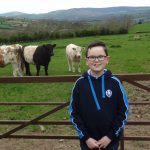