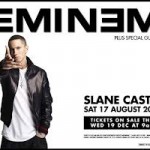 There is a vast difference between attending an Eminem concert from the VIP halls and from the grassy knoll with the rest of the hoi polloi. For starters you tend to get there much earlier or you have no chance of a spot up at the barriers, which is still separated by yet another strip of grass and then the posh barriers which corralled the uber VIPs (Mary Coughlan, Twink and Gerald Kean according to some reports were giving it their all in those quarters – or perhaps they remained in the castle overlooking the stage where it was dry and not full of screaming fans – who knows).

We arrived with the biggest baddest rain storm you could imagine. Luckily we had been delayed and still parking as this happened. We stayed put eating our sandwiches. Champagne was not served in the plebeian jeeps sadly. We had to do with cans of diet coke, laughing as the windows fogged up and the rain torrented down. Following that shower, sales of ponchos was brisk with the local touts.

Apparently, entrance to the VIP area was met with a strict body search, possibly akin to airport security, and I’m sure that was most disconcerting. That same journalist should have joined the throngs that made their way through all manner of security check points, searches and even putting the contents of our pockets into those plastic see-through bags. Were we leaving the country? No, we were going to the concert. Were there drunk people? Yes a lot of them but in the main their anti-social activities were limited to the men urinating against walls and hedges and the women, well they just fell over a bit (aside from that picture of a young girl administering fellatio on her fella, fortunately not near us) There was no aggression or intimidating behaviour then or throughout the concert. The worse that almost befell our group was a drunk man deciding to try and urinate on the grass beside us. He was stopped by another in our party, an ex bouncer, and told to clear off. He did. Sadly we spotted him urinating further on down the hill. He was just lazy and ignorant, attributes I am sure he would display at his local pub just as easily as here.

Slane itself is a beautiful natural auditorium. Arriving early also gave us the spectacular slow-mo view of the grounds filling up like a gentle human tsunami. And while VIP-watching can be a fascinating sport, I doubt it holds a patch on people-watching at an Eminem concert. Fashion, yes the fashion was amazing. It went from Slim Shady orange onesies to onesies just for the fun of it, including dog themed, spotted and furry outfits. The men for the most part opted for shorts, boots and lots of bare skin. Or rather lots of tattoos with some bare shin showing. The women however took up the challenge and dressed in the tiniest of shorts (lots of bum cheeks on show) flowery tops, beaded blouses and all manner of fashion festival boots. All topped with the ubiquitous ponchos as we did not have the benefit of staying dry in the castle.

Drinking was consistent but not raucous. As a designated driver and staying sober, it was fun to watch the gathering inebriation. People are truly talented and clever and resourceful. The fuller they got, they less booze they spilt, the more they weaved between the crowds, despite resembling mini human leaning towers of Pisa, the less they stepped on anyone. It was like watching puppets at times held up by a thin invisible thread, leaning first this way, then that and never quite falling over.

The support bands were inconsistent. Yelawolf and PlanB were good but the other two whose names elude me now, were not great. That is not just my opinion, the crowd agreed.

Then, an hour fashionably late, Eminem came on stage. In fairness the entire concert was running an hour behind. By now it was dark and the crowd were buzzing. He started up, trademark hoody in place, and a roar rained across the amphitheatre. We were good to go. He did some new stuff, some new classics including I’m not Afraid and Love the Way you Lie and then his all-time classics The Real Slim Shady, Without Me and My name is.

During one of his short chats the Detriot rapper asked the crowd to make an Irish noise. True to form the strains of Ole Ole Ole rang out across the hill. Jack’s army took up the cry and it echoed around the chamber before Eminem pulled out the big guns and fired his next track over the audience. In the darkness, the crowd heaved backwards and forwards. Some songs had everyone moving with passion, others people stood silently, maybe raising the one arm salute and giving it attitude. His fans were all word perfect, not matter how fast he rapped there were people in tune and in time and in lyric with him. I doubt the VIP crew could match that.

Footnote: Apparently I am a very cool mom. I say this with certainty for two young men approached me and told me so, once during the Eminem’s session and a second time as I was leaving the venue, bunched up in the crowd. The poor chaps thought they were giving me a big compliment – which they were – but all I could think was How do they know I’m a Mom. Of course, the fact that I was twice the average age of the audience might have given it away. The measure of being cool is directly inversely proportionate to age divided by Eminem.