Four years ago, the HSE in conjunction with the Irish Heart Foundation (IHF) ran a pilot to provide a free heart health check for farmers in their shared place of work, the Mart. The pilot was initially met with some resistance and suspicion according to Marese Damery, health check manager with the IHF.

The IHF is a charity and is 93% funded through public donations. The remainder comes in the way of government funds of which the HSE is partially responsible. Most years the charity screens in excess of 15,000 people across the country in communities, institutions and corporates. There is a panel of 26 nurses sourced from across the country and one mobile unit recently purchased to travel to more remote areas.

‘The idea of checking farmers in marts was genius,’ says Marese. ‘It made sense to reach out to more isolated members of society, especially as recent census figures shows the growing number of male, elderly farmers living alone. We wanted to see if we could make a positive impact on their health.’

The first step was to persuade marts around the country to open their doors to the visiting nursing staff. Auctioneers such as Joe Kinsella at Baltinglass Mart in Co Wicklow, was an early convert. ‘Working in a mart you can see the importance of the social aspect to our customers,’ says Joe. ‘Sometimes the bit of food and banter in the canteen, or simply the comradery before and after the live auction, is as important as the actual sale. In fact, many regulars come even when they are not buying or selling – they come for the company and the social aspect,’ he says.

The attendance of the nurses is well flagged before their day in the mart and some appointments made in advance but the majority of farmers are encouraged to attend opportunistically.

‘Some men can be shy,’ says Marese. ‘They can give excuses that they need to change out of their work clothes but if possible we just get them to wash their hands so we can to do the pin-prick cholesterol test.’

Each farmer is a given a full half hour with the nurse. In addition to checking for vital statistics for risk of cardiovascular diseases (CVDs), the men are also questioned about their lifestyle, alcohol consumption and perceived levels of stress.

‘Our surveys held in the first two years of the project show that farmers are not as healthy as one might imagine,’ says Marese. ‘The introduction of quads and modern equipment means they were not as active as they thought. In addition, farmers tend to have late meals and large portions. All in all it combines to make the majority of men surveyed fit into the obese category.’

In one self-assessed measure on stress the majority of farmers, more than 60%, professed to being stressed some of the time while more than 16% felt stressed most of the time.

Joe is very keen to see the IHF visit his mart and while at the beginning they only had two clinics a year now they host four clinics annually to be able to offer a greater reach within the farming community.

‘It is well known that men, especially older men, are reluctant to visit the doctor,’ says Joe. ‘Add to that the rural l isolation and the peaks and troughs of the cattle and sheep market prices and sometimes farmers allow these trends to affect their health and wellbeing. And for many the mart might be their main social interaction during week.’

During the course of the health checks over the past four years almost 4,000 farmers have been checked in 43 different marts in 22 countries. This has proven vital as 77% of men surveyed were found to have 3 or more CVD risk factors based on objective measured health outcomes from the heart health checks. However, when the non-measured, self-reported health risks were added in, a startling 80.7% of farmers had four or more CVD risk factors.

In fact, more than 79.2% of farmers surveyed were advised to visit their GP as a result of the screening.

‘Our health check can be vital,’ says Marese. ‘Farmers are at high risk of being impacted by CVD conditions, but the good news is that by taking action they can reduce their risk by introducing new lifestyle measures. CVD is 80% preventable.’

Another important component of the Health Check is the tying up with local services pertinent to each region. ‘We try and make sure our nurses are as local as possible,’ says Marese. ‘Then we make sure that we can provide details on local services, link in with the local GP, find out where the nearest Men’s Shed is located and provide information on other supports such the HSE funded Rural Farmers Stress helpline.

To find where your nearest Health Check is taking place, please click here

What the Nurses Say: 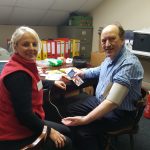 Matt Malone having his medical checkup in Nenagh Mart

Linda Kidd is a nurse with the IHF and has been working with the Healthy Heart Check since 2005. With a background in farming and also now married to a farmer, her rural experience is important in her work. She stresses at the outset though that she does not remember individual cases, that everything is confidential.

‘Men’s experiences of doctors are very different from women’s,’ she explains. ‘Across the board – regardless of occupation. Women tend to visit their GP as an adult for family planning advice, then if they get pregnant they visit the GP throughout the pregnancy and afterwards as they bring their baby in for the different injections and developmental checks. Thereafter, it is most often the mother who brings a sick child to the doctor, so they develop a relationship with them. Men don’t and as a consequence have a great fear of doctors, rather like the stereotypical fear of dentists regardless of gender.

‘In addition, farmers being self-employed are very busy, says Linda. ‘With my farming background I can understand what type of farming they are doing and be also be suggest making an appointment to see a doctor when things ease up.’

Linda also explains that farmers arriving into the mart can be very stressful. ‘Perhaps the animals have been collected at 6am, there is a lot of paperwork required and it has to be in order for the animals to proceed to sale. When the farmer agrees to see us, we also try to find out how they are.  One of the questions is about stress. A majority of farmers are very stressed and if we feel it is appropriate then we suggest they visit their GP.

‘Mostly the advice we give is medical,’ though she says.

On occasion Linda has met women in the clinic. Sometimes they might be farmers in their own right, sometimes farmer’s wives with a more indoor lifestyle. ‘We have found they are also less healthy than women of the same age in a different profession. Farming is a tough physical career. It can be cold and wet outside. When people come indoors they want food and they want it fast,’ says Linda. ‘This can lead to a culture of comfort food.’

Another delusion might be that a farmer thinks because they are outside all day they are healthy. ‘However, perhaps they are checking the herd which calls for a lot of observation and leaning over gates to check on animals,’ says Linda. ‘No farmer is going to rush into the middle of a field and potentially scare the animals. So I often suggest to a farmer to head out at the start of the day and walk the fastest they can to their furthest field. And from there to walk slowly back and check their animals as they go. At the IHF we suggest a brisk walk of about 30 minutes five times a week. This is one way of increasing exercise.’

There is one other area where farmers and farm hands suffer and that is diet. ‘In a previous generation, farmers and farm labourers would work on a farm and be fed by the woman of the house. This doesn’t happen anymore so the farmer and labourer head off to the nearest chipper for lunch,’ says Linda. ‘Again this is not healthy or beneficial for the farmers.’

As part of the IHF Linda encourages farmers to get out walk.  ‘If they bringing their children to GAA training or similar I suggest they walk the pitch rather than chat on the side line. At the end of the day being out in the open and in the fresh air is great but farmers need to get more exercise,’ she says.

Finally Linda makes one more cogent observation. ‘Before foot and mouth there were a lot of callers to farms – people delivering seed, products, provisions. That stopped during the scare and has largely not resumed. As a result there are very few callers to farms. If you are a single or widowed farmer living on your own there is no one calling anymore. And that can have huge negative impacts.’