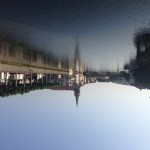 I could not believe it. We had made it. We arrived at Narbonne sur plage (on the beach) in the afternoon after completing our 112km cycle.  We were wrecked but exalted. Some cyclists ran straight away into the water in their riding gear, others changed into shorts, but we all piled into the Mediterranean which felt cold after the hot sunshine and the long ride. The water was wonderful and cooling.

Then we had lunch on the beach before cycling the 25km back to Norbonne city itself. Tonight we shall have a celebratory dinner and then fly home tomorrow.

So, over the five days we have cycled a total of 650km with climbs of 7500 metres. The climbs were the tough part of the trip, cycling on the level is easy but elevations are a killer. Last year I did the Lyons to Nice race which was hard, but this trip was definitely tougher. There are rumours of which route they will take next year with San Sebastian to Barcelona the current favourite. I am not sure and I don’t mind but I definitely doing it again.

I have raised €6700 so far from friends and colleagues, thank you so much. I am hoping to meet my fundraising target of €8000 so if anyone would like to donate, please do!

Since my shoulder injury on Monday I have not really slept properly; when I turn the pain wakes me up, but I am hoping tonight to have a few beers at dinner and they might medicate me through the night. So, thank you again for your support and until next year, Bon Chance!

It is at this point that all riders are faced with the wall. The combination of three gruelling days takes its toll on all riders. Tiredness, injury and sheer fatigue hit at this point. Everyone feels it. There is neither the excitement that characterised the beginning or the euphoria that takes over towards the end. This is slog territory and we do well to keep going.

Fortunately today was very uneventful. Uneventful is good for cyclists. We did about 108k in total which is quite manageable. The beginning was tough, about two hours of undulating hills as we leave the Pyrenees behind. There is no easy way out of Bagneres on a bike – unless there is an engine attached. Instead we had to make do with tired limbs and aching bones.

My injury is a bit better. Yesterday I basically had a dead arm. It did not more than hold onto the handle bar and provide balance. My other arm did all the steering and hard graft. Today was much better and I could trust my arm again.

We covered some 70k by lunchtime which was terrific leaving only 40 or so after lunch. A real walk in the park by comparison, is that a cycle in park. Either way, our tiredness evaporated as we set off after lunch.

We arrived at St Girons early and pottered around. We are bonding well, some of the slower journeys allowed for chatting as we cycled along. Everyone has a connection to the Hospice in some way and we share these stories.

Two more days to go. I think we have broken the back of the safari and I look forward to our continued journey 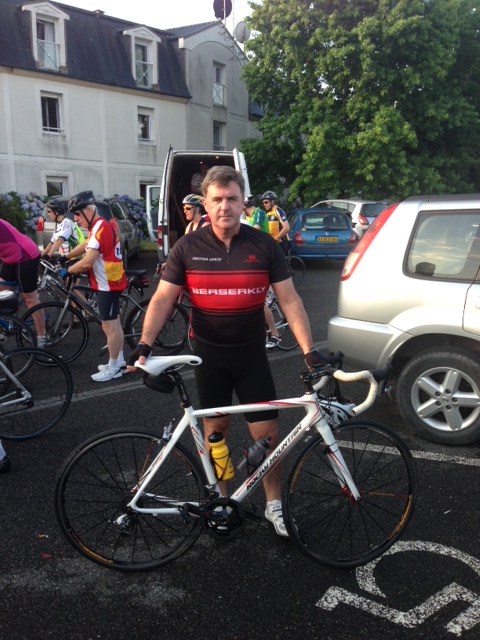 This was the toughest day in our journey and to be honest I wasn’t sure I was going to even make it. My shoulder was really painful and I hadn’t slept much at all. I was in a real quandary if I could make it today. In the end I took a diaphine and set off. The only good news was the weather – it was much cooler and not as hot. 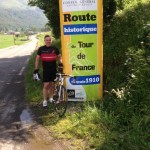 We stopped at lunchtime in Lourdes were I met these fine brothers. The shoulder was still hurting like mad but cycling had eased it a little. After approximately 100k we arrived at the foothills of the Pyrenees, at Tournmalet. The next climb was 25km but all uphill. And when I say uphill I mean really, really steep. The gradient is 8% so it is like cycling upstairs. A group of us made it almost all the way – we were about 8km from the top when we stopped. We were very proud of ourselves but we knew we had to call it a day. We still have three more days to go! 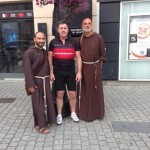 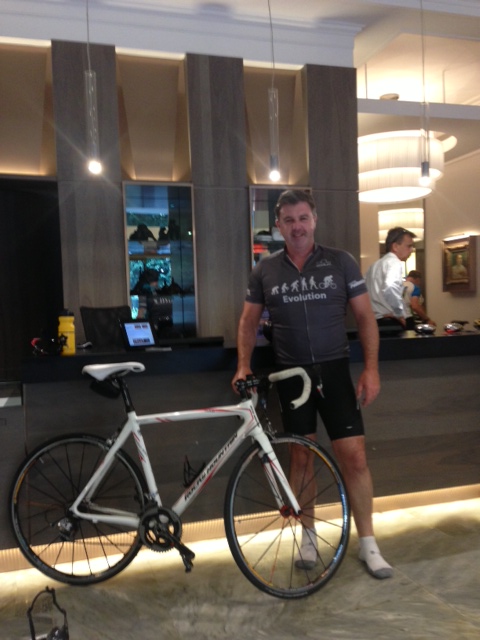 Day one was much harder than any of us expected. There are a lot of shell shocked people who arrived in this evening. Another option on today’s ride was to take a different route, with a bit of a climb, some of the younger lads took that way but they look totally wrecked now. I am glad I was with the main pack. Between the heat and undulating hills, today was unbelievably hard. This is me at the off – looking fit and fresh!

Here are some of my fellow cyclists before the off – there are about 60 in total on this ride. Day one is 113km which is not too much but we cycled in temperatures of 36-37C. It was very hot and humid and really sapped our energy. 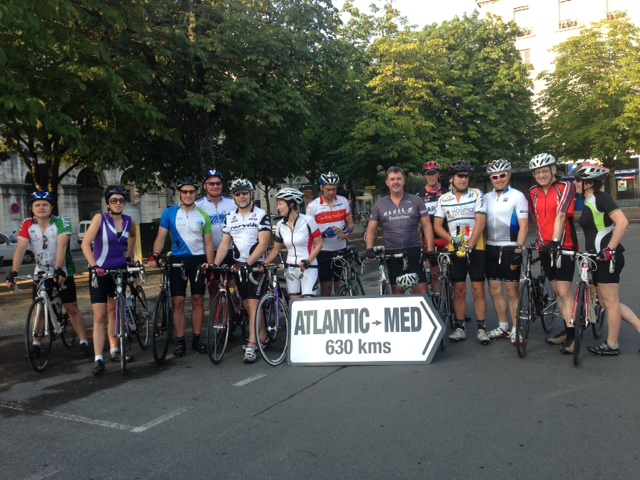 We had a nice pitstop for some much needed drinks at eleven and I am looking fine here. However, shortly afterwards I hit some wet grass and came off the bike. I don’t think I’ve taken a fall for several years and it was the simplest thing. I went on the grass verge for a moment, intending to come off it almost straight away but I did not expect it to be wet. The wheels went from under me and I fell on my shoulder, hip and elbow. I got up immediately and carried on but I am sore now. I have what we call road rash which is sore but nothing that sudocreme cannot fix. Sudocreme and Vaseline as the two staples of every cyclist and can fix most things. Not a sore shoulder however, and I am a little worried about the pain. Time for dinner now and I will see if it needs medical attention afterwards. 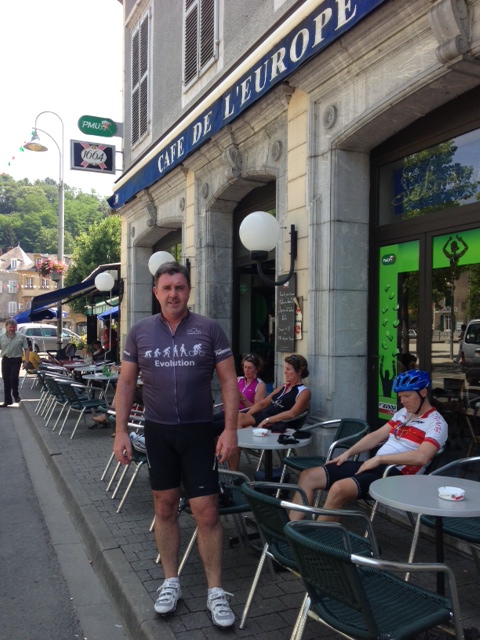 After our very tough first day, we have our hardest day tomorrow. We are sleeping at the foothills of the Pyrenees and tomorrow we shall have to conquer them.

Arrival in France – DAY MINUS ONE in words and pictures: 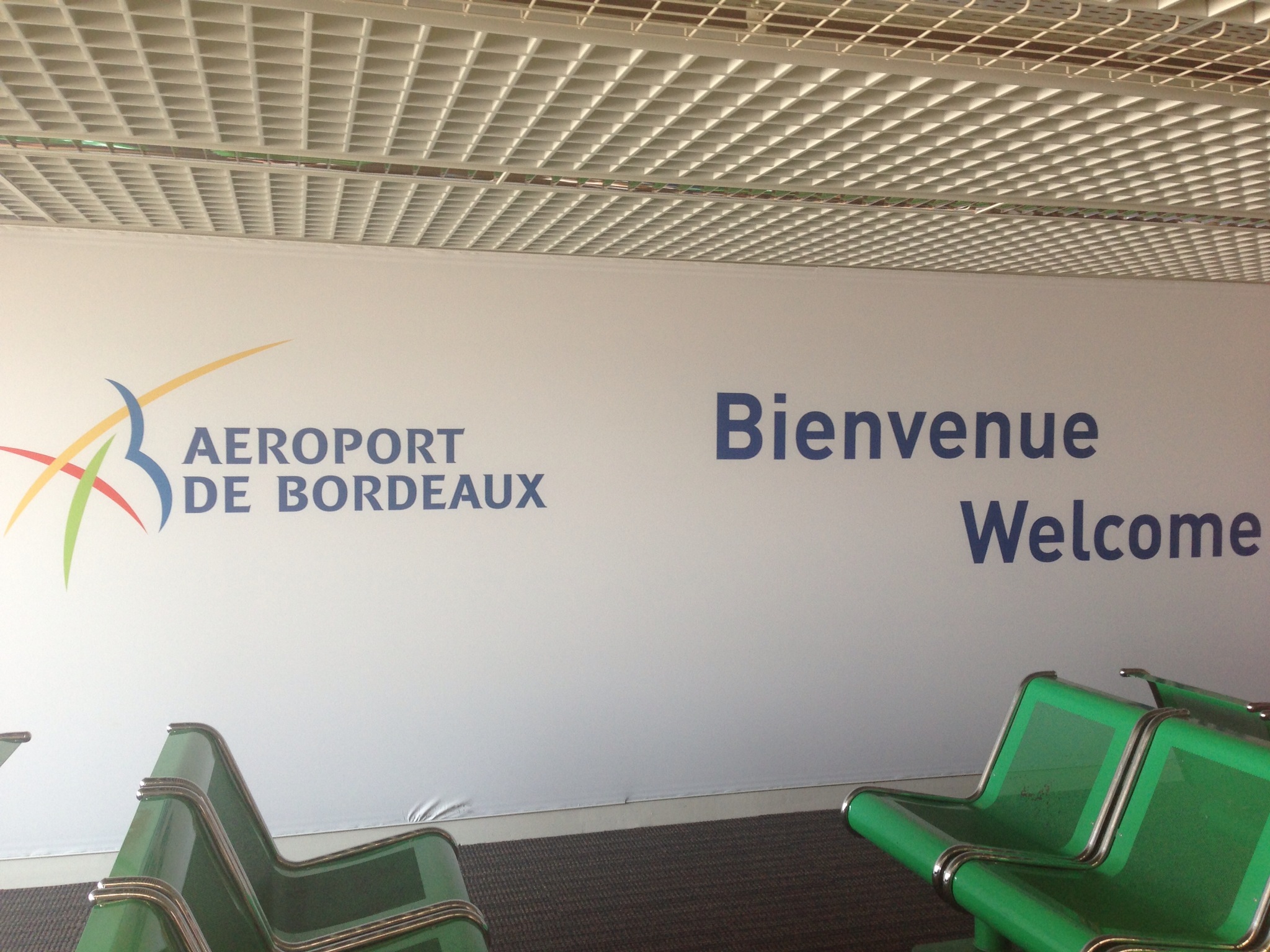 It’s that time of the year again when the supporters of the Irish Hospice Foundation take off again in a great fundraising push. This year our cycling safari is an even greater challenge. We are cycling from the Atlantic to the Mediterranean – some 650 kms in just five days. However, it is not just the sheer distance, nor even the heat, but some of the climbs on the way. It may be downhill from the Pyrenees but we have to get up them first!

At Dublin airport yesterday it was great to see some familiar faces from last year’s run. The Lyons to Nice cycle was tough, but we are warned this year’s is considerably harder. When we land at Bordeaux airport, I am struck by the extreme heat on the runway, which is even more shocking given we had become acclimatised to the heat in our very own heatwave in Ireland.

We have a two hour couch ride to our hotel in Biarritz for our starting point. We have all been glued to the Tour De France and salute Chris Froome as we look into our own personal challenge starting tomorrow. Dinner is steak and frites and thank goodness the bedrooms have airconditioning! 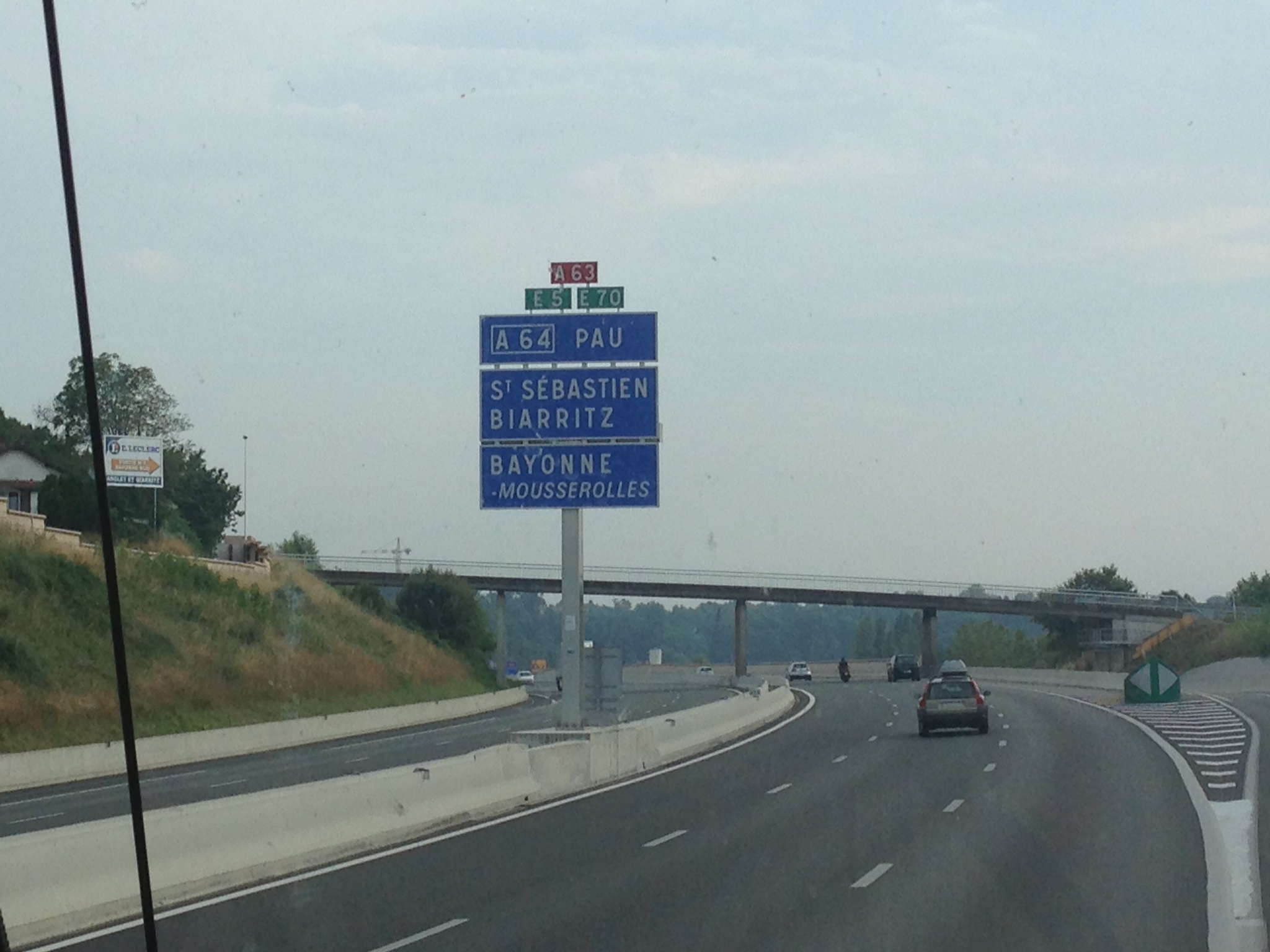