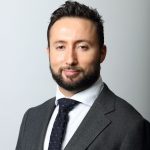 It was late Spring 2016 that Alexander Kravets first stumbled over cryptocurrency. Driving around looking for a real estate deal, a news item flashed up on his phone. It said that Ether had jumped from $80 to $130 in a matter of weeks. Intrigued Kravets had no idea what Ether was and so he rang around his friends, his trading friends, he even rang Deutsche bank but no one knew there either.

‘It was a seminal moment,’ recounts Kravets. ‘I started trading cryptocurrency the following week but it was painful. I mean it took a whole week to even open up a trading account.’

Why is this important? Well, Kravets’ early career reads a bit like The Wolf of Wall Street. While at college he got a part time job as a day trader. He got up at 6am, travelling ninety minutes to Flushing Queens outside New York and worked from 9am until 4pm, at which point he went to college not finishing until 10pm at night. This went on for some seven months with little or no success. He was threatened with firing, which as a student, did not bother him overmuch, until he got the hang of it and started making money.

‘The next twelve years saw me progress up the ladder,’ he says. ‘I was successful at trading, but I also got promoted to lots of other roles including management, training, software development (his degree is in computer science), support and sales.’

He got tired of working for the man and set up his own as an independent trader four years ago, again successfully, when he stumbled over cryptocurrency.

‘There were, and still are, huge impediments to trade effectively in cryptocurrency,’ he says. ‘For starters there are about 60 exchanges in total, albeit that the top twenty are the most liquid. But as many exchanges have been built by blockchain experts and not trading developers it is very hard to open accounts and execute effectively with most.

‘Other issues include timing. There can be huge latency between the exchanges, making arbitrage very difficult; firstly to spot the opportunity and then to close it out in time. There can be a lot of slippage and on a large trade or with a volatile currency, this can impact the value of the trade as much as 10% in either direction.

‘Then there are anomalies such as no stop orders.’

While Kravets is 3000 miles away on the telephone I can almost see him shaking his head in bewilderment.

‘In a trading environment that operates 24X7 with highly volatile coins, how could a regular trader sleep? It would be insane – he might lose millions.’

Kravets could see the opportunity. What trader could not? In just one month (from October 2017) the daily traded volume of cryptocurrency has swelled from $1billion per diem to just under $30billion. ‘Given that the NYSE reports a monthly $1.2 Trillion of volume, it is easy to see where this juggernaut is headed,’ he says.

There was Xtrade.io born. The vision of the company is to bring Wall Street Trading to the emerging Cryptocurrency markets.

‘There are three planks to Xtade.io,’ explains Kravets. ‘First we needed to do that hard work of connecting the 60 or so exchanges to traders in a familiar fashion. We used an existing financial trading protocol – FIX or Financial Information Exchange – to bring the gap. We wrote our own interface with the exchanges to integrate with FIX. Then we released a FIX API so that each trading organisation only has to integrate once – we have done all the hard work.’

The Xtrade FIX API claims to reduce latency, providing relevant market data and also the ability to execute to all markets.  Speed is also an issue with Xtrade operating satellite connections so that trades can be effected in milliseconds – considerably faster than the third of a second normal for internet transaction execution.

‘The top 5 or so exchanges may be less than happy. After all, they tend to dominate most of the cryptocurrency trades, but medium size exchanges will benefit from increased liquidity,’ says Kravets.

Next up was to simulate existing trading environments. Most traders will download powerful apps into their machines to trade. These apps provide faster access but also familiar presentation and uniform order books’ look and feel.

‘We are currently building Xtrade Pro so that traders can download our app and be able to seamlessly trade in crypto. The cryptocurrency trades will look and feel just like regular trades.’

The third plank is to create accounts on most liquid exchanges and allow traders the ability to deal with us as a middleman. We take commission, hedge the deals and transact the trades so they don’t have to worry about what is on the other side.’

Target audiences include institutional traders, day traders and everyone in between. Currently Xtrade.io is conducting an institutional pre-sale. Kravets says this round of funding is aimed at $100million. Afterwards will come the public token sale.

‘We have not set a target on this as yet,’ he says. ‘Nearer the time, and depending on volumes of trades, then we will be in a better position to make a judgement call.’

‘We know that less than .2% of people are currently engaging in cryptocurrencies. This is a tiny amount.

‘This is comparable to initial uptake of the iPhone where early engagement was around .5%. Now this year more than 400 iPhone are sold every minute. You just have to do the math!